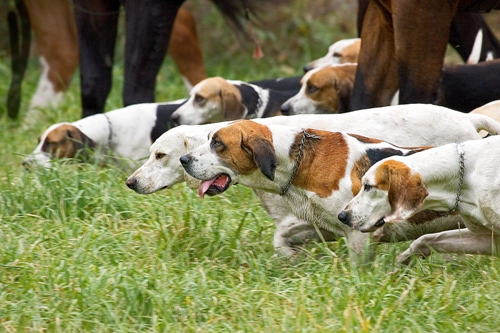 Drag hunting, according to conventional wisdom, is what a hunt does when its country is constricted by suburban development. Sometimes that’s true, but, more often, hunts follow a dragged line of man-laid scent because the Masters want to. And a few hunts have been doing it for more than a century.

Each type of hunting—live or drag—has its pluses and minuses, depending on the needs and priorities of the participants. Drag hunting offers a controlled hunting experience to the benefit of hounds, riders and landowners. With a judicious laying of the drag, hounds are safer because roads and other hazards can be avoided; farmer’s crops are protected from horse’s hooves; homeowners’ lawns and yards are not trampled; and small pets are safe from the attention of hounds (all assuming that hounds don’t riot).

For riders who seek a gallop over fences, drag hunting offers a more efficient use of time, with no standing on a windy hillside while hounds search a covert for a fox (which may or may not be found). Thus the drag-hunting day typically lasts about two to three hours, with guaranteed galloping and jumping, better suiting those with a busy schedule, rather than the three- to five-hour day usually consumed by the ebb and flow of live hunting.