The fabled American foxhound who, along with his get, cornered the silver market in North America has passed on. Potomac Jefferson 2005 was the MFHA Centennial Grand Champion Foxhound at both the 2007 Virginia Foxhound Show and the Bryn Mawr Hound Show one week later.

That year, 2007, marked the one hundredth anniversary of the founding of the Masters of Foxhounds Association. The entire year was filled with special exhibits, competitions, and events all across the country, attracting large and enthusiastic crowds of foxhunters, horses, and hounds. The classes of all the hound shows were swelled with the best examples of foxhounds that could be mustered, along with their supporters. The year 2007 was a big deal.

Every whipper-in needs a steady horse that will willingly leave the crowd, jump the fences as they come, and stand quietly at the gates. It's even better when the horse actually helps with the gates!

Here's a clip through the helmet cam of Cheryl Microutsicos whipping in to the Stonewall Hounds on Uzi—a horse that would put a smile on any whipper-in's face.

This salad is espeically nice becuase it needs to be made ahead. It looks lovely in a glass trifle bowl, and tastes great. 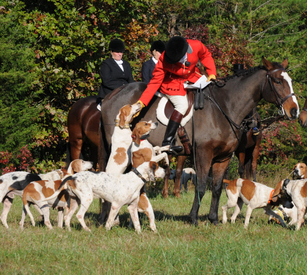 Lili Wykle, MFH and huntsman, Stonewall HoundsOn Tuesday October 19 we welcomed Todd Kern and fourteen of his Snickersville Penn-Marydel crosses to join the Stonewall Hounds (VA) for a weekday hunt. Todd was coming this way with a horse for one of is his whippers-in, Julia Bayliss, who is currently attending Sweet Briar college and hunting with us. This was very exciting for Stonewall because we had never hunted our country with a joint pack. Adding his seven couple to our eight-and-a-half couple made for a nice size pack.

Todd anticipated a good run on something besides red fox, his usual quarry. He wanted to get his hounds on game that they normally don't hunt, such as gray fox or bobcat or coyote. We have that type of varied game (and even an occasional bear) in our country and not many red foxes.

Karen L. Myers photoLast month we announced a new feature on Foxhunting Life --- Hunt Club Pages. We have a page for every North American hunt with all the articles we have published about that hunt or referring to it. Now we want to make your hunt’s page even more informative.

We have added space for historical or descriptive text about each hunt plus a link to the hunt’s website. The description and link will always appear first on that hunt’s page—before the articles.