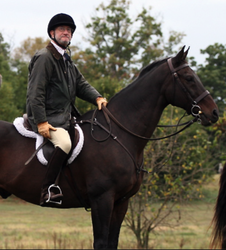 I used to think that the phrase “recreational rider” made the person sound like something of a second-class citizen among equestrians. “I foxhunt,” or “Endurance is my game,” or “My next horse show is in two weeks,” sounds far more exciting than “Oh, I ride around a ring and go out on trail rides now and again.”

That’s not to say that such pursuits and disciplines aren’t more challenging, but by the same token plain ol’ pleasure riding shouldn’t be sneered at, a conclusion that came to mind when I spent a recent week with terminally horsey friends in Virginia.

New York City, where I live, is hardly the epicenter of equestrian activity. In order to ride, which I do whenever the spirit moves me, involves going to a suburban stable. To jump there requires a lesson situation, which is how public stables are able to supervise work over fences. As in any teacher/student situation, concentration is crucial. In riding, that’s focusing on both what the instructor is saying and what the horse is doing, all the while making the conscious or subconscious effort to process information. Although trail riding is less cerebrally demanding, even suburban bridle paths must be shared with joggers, dog-walkers, bicycles, and baby-carriages. Add to that mix cars and trucks for which you have to look out if you must ride along or across roads.

That’s a far cry from Virginia where twice a year I “drop in” on two friends for week-long visits of what the Berlitz language schools call total immersion. The first time I rode there was four years ago. I mounted one friend’s “guest” horse, a lovely Thoroughbred field hunter, then gathered the reins and proceeded to try to collect him. He fussed at the contact, which caused me to apply more rein pressure to try and put him into a frame.

“What are you doing?” asked my host.

Whereupon I was told to put a loop in my reins and a song in my heart and just let my horse carry himself… and me.

That style of “less is more” horsemanship took a little getting used to, but once I did, all the instruction I came to welcome was an occasional “Tighten your girth” or “’Ware hole.”

Not focusing on an instructor meant I could concentrate on the sights, sounds, and scents of a newly-cut hayfield, a sparkling stream to be forded, and a woody trail with its kaleidoscopic light filtering through trees. I found myself sitting taller and more flexibly and breathing deeply. Counting strides became counterproductive if we encountered a log or little coop to jump. I allowed the horse to trot or canter up and over; I didn’t make him jump.

If anything could be more beneficial than how physically relaxed I become during these visits, it would be how my stress dissipates. The outside of a horse is indeed good for the blood pressure of a man, and I feel myself become spiritually renewed. The basis of recreation is re-creation; I am re-created into a new person, a better person whom I like a heck of a lot better than the old me.

“Leave all the afternoon for exercise and recreation,” counseled Thomas Jefferson, “which are as necessary as reading. I will rather say more necessary because health is worth more than learning.”

Amen, Brother Tom, who no doubt would agree that the recreational rider is indeed a citizen of the world in good standing.

Steve Price, a member of FHL's Panel of Experts, is the author or editor of thirty-five books, including The Whole Horse Catalog and the Lyon’s Press Horseman’s Dictionary. FHL welcomes essays from Subscribers. This is your space!

I wish I'd come across this anonymous quotation when I wrote the above, but better late than you-know-what:

"Recreation's purpose is not to kill time, but to make life, not to keep a person occupied, but to keep them refreshed; no to offer an escape from life, but to provide a discovery of life."
Reply
Refresh comments list
RSS feed for comments to this post