Successful and long-lasting hunting establishments are those which not only provide benefits to their subscribers, but also contribute to and become an integral part of their communities. Like the Sewickley Hunt (PA), which will stage a demonstration fox hunt on October 9 to help raise funds for the Hartwood Acres Park in Allegheny County.

The park covers 629 acres just ten miles from downtown Pittsburgh. Hartwood is considered the crown jewel of the county’s park system, comprising nine parks totaling 12,000 acres. At Hartwood, hounds will follow a drag laid over the trails and fields, with funds being raised from the sale of tailgating spots in strategic areas for viewing. Funds will help the nonprofit Friends of Hartwood restore and preserve the historic stables at the former estate, the centerpiece of which is a stately Tudor mansion.

The thirty-one-room slate-roofed stone mansion was built by Mary Flinn Lawrence in 1927 and features design elements she and her husband John Lawrence had seen in a manor house in Broadway, England. The grounds of the estate were transformed by Mrs. Lawrence into an equestrian showcase of riding trails, show rings, steeplechase course, and stables.

The property was sold to the county in 1969. The mansion contains a collection of original English and American antiques. The park also offers a large-stage concert area where summer concerts and music festivals are held. Thirty miles of trails are available for horseback riding, walking, hiking, biking, and cross country skiing.

The hunt has never ridden at Hartwood, according to Andy Komer, MFH, but no problems are expected in traversing the country. Komer will talk to spectators about the hunt and its history, which spans nearly a century. The other three Sewickley Masters are Anne Metcalf, Diane Dubois, and Doug Christy. John Tabachka is the professional huntsman, and, as a multiple winner of the annual MFHA Horn Blowing Championship, could give a good demonstration of horn calls to the spectators as well.

Sewickley member Amy Giammattei, who serves as chairman of the Friends of Hartwood, suggested the demonstration as a fund raiser for preserving the stables. With stalls finished in varnished oak, it’s a project deserving of restoration, indeed. Thomas H. Jackson, huntsman for twenty-five years at the Mission Valley Hunt (KS) and huntsman and Joint-Master of the Coal Valley Hounds (KS), passed away on Wednesday, October 21, 2015 at age seventy. Tommy enjoyed a stellar reputation in the hunting world. I can honestly say that I never saw any huntsman more passionate about seeing the job done right.

Born in Bellevue, Pennsylvania on June 19, 1945, to Joseph Henry and Mary Agnes (McAuliffe) Jackson, he went to work at a very young age due to family financial struggles. He loved the outdoors and farm life. One of his first jobs was at a dairy farm in the Sewickley area.

After returning from Vietnam, Tommy went to work as a stable groom at the Allegheny Country Club. He grew fond of horses and horseback riding, and this job launched him on his life-long career. Through the club's affiliation with the Sewickley Hunt, he worked his way up to the position of Professional Huntsman. Foxhunting was not just a job or a hobby for Tommy; it was his passion. 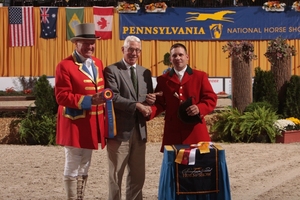 Sam Clifton is 2011 North American Horn Blowing Champion. / Al Cook photoSam Clifton, huntsman for the Green Spring Valley Hounds (MD), won the 2011 North American Horn Blowing Championship on Monday, October 17. The sound of the horn has been a part of Clifton’s life from the cradle. His father Stephen is the long-time huntsman at the Eglinton and Caledon Hunt in Ontario.