About the Rockbridge Hunt

The Rockbridge Hunt was founded in 1947 by Warren Edward "Tex" Tilson at his farm, Broadview Ranch. Rockbridge was registered with the Masters of Foxhounds Association in 1960 and recognized in 1962.

Located near Glasgow, Virginia, the hunt owns twenty acres with several buildings: the kennels, a large barn, a riding ring, a huntsman's house, and the Tex Tilson Lodge. The main hunting territory includes the area between the kennels and the Tilson family's farm. This is a large area of many contiguous farms. The eastern part of the territory is centered around Montafon Farm and Windward Farm. The northern part of the territory is centered around West Airslie, near Brownsburg.

Foxhunting with Rockbridge Hunt is an experience in good horsemanship, friendship, and enjoyment of the outdoors. The activity with horse and hound is an exciting seek-and-chase sport adhering to codes of conduct established by the Masters of Foxhounds Association.

We hunt on Wednesday afternoons, Saturdays, and occasional bye-days at various locations in Rockbridge County.

When possible, three fields (riding groups) are organized and led by a Field Master for every hunt. The first field follows the staff and hounds over fences at a speed dictated by prevailing trail conditions. The second field will ride at a pace to generally keep up with the first field but forego jumping. A third or hill-topping group is enjoyed by riders desiring a quiet, peaceful pace without jumping. 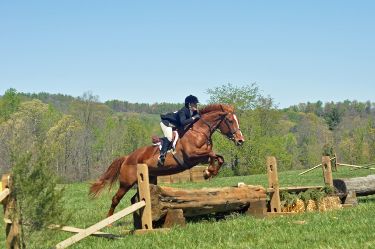 Erin Bartle and her field hunter Firestorm are ranked ninth in the country in the Novice Division by the U.S. Eventing Association.  /  Beth Sutton photoErin Bartle rode her USEA nationally ranked Novice horse Firestorm to the First Flight Championship, the Melvin Poe Cup, and boosted the Rockbridge Hunt to the Clifford Hunt Championship—most points by a hunt—at the Maury River Hunter Trials, Virginia Horse Center, Lexington on April 7, 2012. 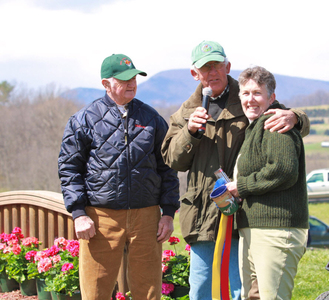 Cheryl Microutsicos and her handsome bay, WoW! Graphic Design’s Up & Coming (a.k.a. Uzi), accumulated the most points in the First Flight Open division to win the Melvin Poe Cup, sponsored by Brooks Cushman of Winbrooke Farm and awarded by the legendary Melvin himself, in attendance with his wife Peggy. Here, Cheryl is congratulated by Melvin and by Brian Ross, co-head of the Virginia Horse Trials.

Rockbridge Lawyer and Lead: A One-Two Punch at Carolinas 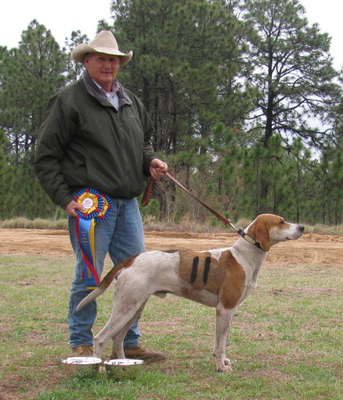 Rockbridge Lawyer 2008 and his littermate Lead scored a one-two punch at the Carolinas Foxhound Performance Trials on March 26 and 27 in Hoffman, North Carolina. Competing against hounds from twelve other hunts, the Rockbridge pair finished first and second respectively after two days of hunting. We talked to Conner about his handsome and talented hound.

Trial organizer Fred Berry, MFH of the Sedgefield Hunt, has been actively involved in foxhound performance trials for years—first judging, then organizing. As a result of Berry’s considerable experience, he has introduced some interesting new wrinkles into the management of his trials to improve both the hunting and the experience for the field.