Stu Grod Retires from the Field at Eighty-Four

Julie Stuart Seger photoStuart Grod—popular field member of the Fairfield County Hounds (CT)—has retired after forty-three consecutive seasons hunting in the first flight. A retirement party was held in Stu’s honor at the hunt’s clubhouse on November 22, 2014, where well-known food and travel author Michael Stern read a poem he composed for the occasion.

"Build a bridge with your hands on the mane;"
"Trot smooth as you head for the jump;"
"Go light when your hands hold the reins;"
"And don't crowd on the lead horse's rump:"

Just some of Stu's tips I've acquired
Since I started to ride with you folks.
I'll miss you up there, you strange country squire
With your bright eyes, your wisdom, and jokes. The odyssey of Live Oak Charter—the frightened foxhound that escaped from the Virginia Foxhound Show last May, traveled from Leesburg to Middleburg (more than twenty miles as the crow flies), crossed two major four-lane highways, subsisted on whatever food he could find, lost part of his tongue and shattered his jaw—finally ended after six long months in Hollywood’s finest style.

Charter has been adopted by the vet tech that cared for him at Blue Ridge Veterinary Associates. He lives on a hundred-acre farm, sleeps on his new owner’s bed, and runs long distances with him every day. Charter’s survival literally “took a village,” and Live Oak MFHs Daphne and Marty Wood, who supported and monitored the efforts of so many dedicated people from afar, couldn’t be happier. 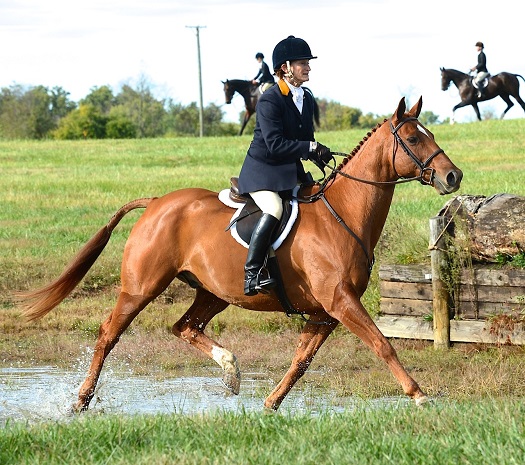 In a hark back to bygone days, the Theodora A. Randolph Field Hunter Championships combine a whirlwind week of foxhunting and socializing against a backdrop of sporting estates, well-bred foxhounds, and passionate foxhunters. Always held the last week of September and ending the first weekend of October, this year's event attracted seventy-four entries with a brilliant card of hosting hunts: Orange County Hounds, Blue Ridge Hunt, Loudoun Fairfax Hunt and the Piedmont Foxhounds. Judges ride alongside the field to observe the competitors in action before selecting several riders each day, based on how well their horses performed, for the finals on Saturday. Every hunt hosted a tailgate, and there were social functions every evening.

The latest report on the one Live Oak foxhound still on the lam is that he has made an art of his early retirement. Daphne Wood, MFH reports that Charter is alive and well, though thin. It turns out that the kind kitchen employees at the Middleburg Tennis Club on Zulla Road have been putting out kitchen scraps for him. The good news is that this regular source of food has probably kept him safe from roaming and crossing roads, but it has also made it unnecessary for him to venture into the trap that has been baited to secure him.

With Piedmont huntsman Spencer Allen on vacation, first whipper-in Neil Amatt has been deputized to capture the escapee. The plan is to send Amatt to the kitchen with a Spanish-speaking member of his posse to request that the kitchen scraps be turned over to him for baiting the trap.

Daphne's fondest wish is to now “end this ordeal for all concerned”! She hopes to be soon able to send a concrete expression of her gratitude to Piedmont “to thank them for the endless efforts they continue to make to bring this to a happy ending.”

Neil Morris hunting a stakes-winning hurdle horse at Orange County / Douglas Lees photoNeil Morris is a new Master of the Orange County Hounds (VA). Morris joins current Masters John Coles and Malcolm Matheson in leading this, one of the most prominent hunts in the country.

“I’m so happy to have him,” said Coles. “Neil can do anything in this job that anyone could want. He’s a great guy, a great horseman...he’s made to order ”

Better known perhaps for his association with winning race horses he has trained for Kinross Farm, such as Grade I Stakes winner Sur La Tete; Virginia Gold Cup winner Miles Ahead; and Virginia-bred Researcher with winnings in the seven figures, Morris is at the same time an avid foxhunter. He hunts his steeplechase horses regularly and credits that time off in the field with providing the bottomless stamina his horses so often display on the race course.