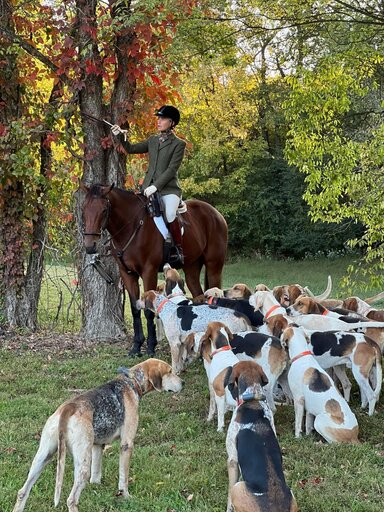 Leilani Gray gives a hunt report of a very popular hunt that occurred early in October in southern Middle Tennessee. This is Leilani's first season as the Huntsman for Hillsboro Hounds. Her husband Johnny Gray retired at the end of last season.

After today's hunt, all the field members were saying that it was the best hunt of the season. With all but one of our 19 1/2 couple back in the trailer safe and sound, and the last one out having been collected quickly afterward, all the staff was able to smile and appreciate the fact that the members had such a fantastic time.

The day started like most of the past month, with a clear blue sky and dry as a bone ground. At first, there were a couple of attempts by the pack to carry an old line and a couple of good deer-schooling opportunities. Then, as a cold line appeared to disappear, we pushed forward and struck what appeared to be heel line. No... it was just a sneaky coyote that took us on a fantastic (for some) run.

All things considered; the hounds were fantastic doing exactly what they were supposed to be doing. The coyote, on the other hand, took us directly to Exit 27 on Interstate 65. Okay, we didn’t go quite to the interstate, but we were only a quarter of a mile from it when we all viewed the coyote going south. Hounds were hot on the trail just seconds behind. So for all those members having a fantastic time, staff was galloping down the roads and hillsides paralleling the interstate. It was just a bit nerve-racking for us.

The coyote continued to bob and weave within a quarter of a mile of I65 for about four miles straight south until we finally cut off the front end of the pack and began collecting hounds. Again, all in all, the day was successful, productive, and stressful... oh, and fantastic!