The Kriz Horseshoeing Dynasty: A Tribute 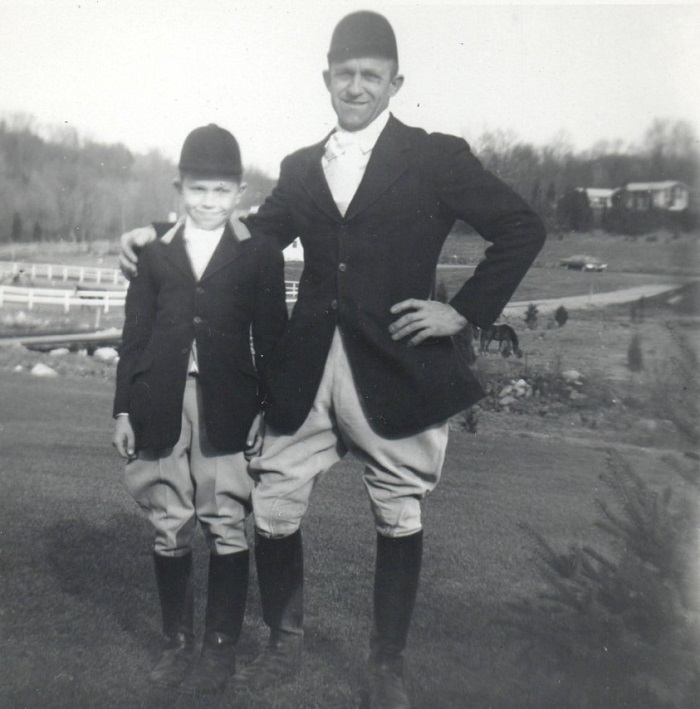 Joe Kriz and son ready for a day with the Middlebury Hunt (CT), circa 1962

Joe Kriz, known by family and friends as "UJ" (Uncle Joe), and his son Joe Kriz, known as "Little Joe," appear in the photo above in hunting attire for a day with the Middlebury Hunt (CT), circa early- to mid-1960s. In the background is the family farm in Bethany, Connecticut, owned by UJ and his brother Johnny.

UJ and Jonny were seventh-generation farriers in a family that immigrated to the United States from Czechoslovakia. The brothers lived side-by-side on the farm for most of their adult lives, including their final years. Because of their hospitality and generosity, their farm was the local hub for horsey folks in the area. Sundays and many holidays were Open House with food and drink and good cheer in abundance.

Adding greatly to their renown, they were the farriers responsible for shoeing the Anheuser-Busch Clydesdales. Flown regularly to St. Louis, Orlando, San Antonio, New Hampshire, San Diego, and Fort Collins, Colorado for that purpose, they shod more than 120 Clydesdales every six weeks. And after World War II, when Japan's Emperor Hirohito gave the American Military a prized Arabian stallion as a goodwill gesture, UJ got the job of shoeing it.

UJ and Johnny were excellent farriers, much in demand in the local area, and are inductees into the International Horseshoeing Hall of Fame. Many of the current group of local farriers apprenticed with UJ or Johnny. In fact, it's difficult to identify a local farrier who has not been influenced by them. When I started hunting in the late 1970s, if you had one of the Kriz brothers as your farrier, you were considered to be both fortunate and savvy by the members of the foxhunting community. In addition to shoeing horses, the family did blacksmith work related to the shoeing, such as making and modifying their own tools.

The Kriz legacy of horseshoeing was continued into the eighth generation by Little Joe, now retired, and Johnny's son Tim. In addition to shoeing, Tim remains active in the draft horse world, buying, selling, and training. He has several teams that he drives for events such as parades, weddings, and funerals. Tim's son Cody, now in his late twenties, is a ninth-generation Kriz farrier with an active shoeing schedule and a tree service that he runs.

In addition to being world-class technicians, the Kriz commitment to servicing their clients is without equal. That goes back to UJ and Johnny and probably further. They take pride in the fact that no horse in their care misses an event because it lacks a farrier’s attention. That dependability gives clients an enormous sense of security.

It was my great privilege and pleasure to take care of UJ and Johnny during their final illnesses, even though the knowledge of their impending loss was very saddening. Two stories must be told.

First, when Johnny was very ill, within two weeks of his demise, he came to see me. The first words out of his mouth were, "Doc, how are the horses treating you?" At his insistence, we spent ten minutes talking about horses before he let me inquire about how he was doing. That was Johnny.

Second, after a session with UJ, he stood up and said to me with a smile on his face, "Now Doc, go easy on the bill, 'cause if you don't, we'll just go up on the shoein'." That was UJ.

Paul Kraus, a foxhunter, practiced medicine in Waterbury, Connecticut, and was Chief of Urology at the two local hospitals for more than fifteen years. He was involved in the surgical training of Yale Urology residents, was early to adopt laparoscopic techniques, and performed the first laparoscopic nephrectomy in Connecticut. His department was also the first in New England to employ radioactive seed implantation for treatment of early-stage prostate cancer. He spent the last ten years of his practice at the VA hospital in Northampton, Massachusetts, retiring from practice at age seventy-eight.

Paul began foxhunting with Mr. Haight's Litchfield County Hounds (CT) in 1978. He was a member of five hunts in Connecticut and New York and two hunts in Virginia. He owned Cedar Mountain Farm in the heart of the Bull Run Hunt Country for six years where he ran a B&B for foxhunters and also provided hirelings. He often hunted in the English Shires, in Yorkshire, and with the Exmoor. Paul continues to hunt as he approaches his eighty-first birthday this summer.