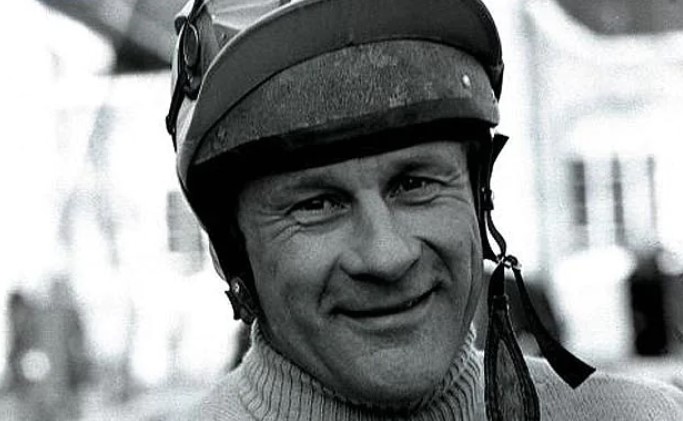 My first ride on Carrickbeg was in the Leopardstown Chase [run on the final day of the Dublin Racing Festival]. With England frozen solid, he had not run for five weeks, and I had been leading the life of Riley―or rather of Soapy Sponge: ten wonderful days hunting in Ireland.

Of course, the fox and the hound play essential parts, and I wish I understood them better. I respect and envy those to whom every cry of a hound or a note of a horn brings an immediately recognizable image―the experts to whom one clever, successful cast means more than five minutes across the best of Leicestershire, Limerick, or Tipperary.

But each man to his taste. For me, the high point of any day’s hunting is always apt to be the delight, hard to describe but harder still to exaggerate, when you meet a big fence right, and your horse picks up, lands safe, and sails away, ears pricked and looking for the next one.

So it was partly the pressing need to get fit for my Grand National ride on Carrickbeg and partly a previously unfulfilled ambition to ride over the Irish banks which took me to southern Ireland.

We had, to begin with, the best possible guide and mentor―the marvelous, incorrigible Pat Hogan, by far and away the best man across country I have ever seen. Wherever we went hunting (including days with packs of whose staff our critical host did not altogether approve―‘he has a reed in his horn, would you ever believe it?’) Pat was treated (or anyway, behaved) like an honorary field master. It was just as well since the order, in any worthwhile hunt, was always the same: the fox, the hounds, PP Hogan, cantering at ease on a long rein, the huntsman (provided that he had been wide awake when they found!), a select half dozen, which in those days usually included Alan Lillingston, and the rest of us usually strung out like also-rans in a selling chase.

The day I remember best of all began, like so many Irish days, in the pub of a village (probably either Knocklong or Elton) not far from Hospital. When Thady Ryan and his Scarteen Black and Tan hounds arrived, jumping powder (port and brandy was the recommended mixture for nervous English beginners) had been on offer for quite a while. As we moved off―just to remind us that this was Ireland―a cheerful stray donkey called Joe joined the hounds. ‘Jumps like a buck, too,’ someone said−but a little boy recaptured Joey before he could confirm that warranty.

I forget the name of the gorse where we found, but remember every detail of the bank over which Pat Hogan―’Just trot and hang onto the neckstrap,’ he had advised―promptly disappeared. The landing side was ominously invisible, but Tango, the smallish bay cob Pat had hired for me from the infinitely reliable Willie Gleeson, either had periscope eyes or did not care.

Bouncing gaily across the first ditch, he landed with a crash in the mess of blackthorn and bramble which separated it from the second. That was two yards wide, deep, and full of water, but after a moment’s pause to untangle his feet, Tango cleared it with equal ease. It was only thanks to Pat’s advice about the neckstrap that I was still, more or less, in tow. After a dozen more fields and what felt like a hundred varieties of banks, our particular ginger-whiskered gentleman had the good sense to pop down a hole.

With the hounds well back, one of Thady’s terriers was called for―a splendid rough-coated desperado, white with a few black patches. His name was Jacko, and on account of what followed I have named my last two black and tan terriers in his honour. Because when, thanks to Jacko (which would, of course, now be against MFHA rules), the fox emerged, the first obstacle in his path was what I think they called a ‘corporation ditch.’ Roughly the width of Aintree’s Chair Fence and full of black smelly water, it guarded a smallish but substantial bank and was, I now understand, something to do with the local dairy.

The fox got over somehow, and so did most of the hounds, but just as I was asking Tango for his solution to this new problem, Jacko (the terrier) took off under Tango’s nose. The space that he cleared was a caution to see, but with three-inch legs, he could hardly be blamed for landing a bit short.

Tango was in mid-air by then, and he was even less to blame for being distracted by a small white figure struggling for a foothold on the far bank. Horses don’t tread on dogs if they can help it, and I shall always believe that Tango sacrificed himself (and me!) for Jacko.

The sacrifice, though not fatal, was a real one because with gravity against him, Tango toppled slowly over backwards into the ditch. You’ve heard about situations in which ‘everything goes black.’ Well, this was one of them. The mud closed over both our heads, and for the rest of our stay, I was known as the ‘Coalman.’

By the end of a marvelous afternoon’s hunt in which I only fell off once more, Tango (who never turned his head all day) was nearly dry, and we hardly smelled at all. I shall never forget the Black and Tans, and, if I did, there is Jacko MarkIII to remind me.

But there was, of course, a more serious purpose to be achieved in Ireland than enjoying myself hunting, and Carrickbeg ran well enough in the Leopardstown Chase to keep the Grand National dream alive. Running third to Owen’s Sedge (owned by Gregory Peck) was encouraging, but his pre-National outing in the King Muir at Cheltenham ended with my being deposited on the flour at the fifteenth fence after he had blundered when still very much in contention.

In the middle of February I had written in the Telegraph about Carrickbeg’s Aintree prospects, finishing with the perfectly reasonable view that “Victory would, of course, be sweet, but if we got around safe and finish not too far away there will be no complaints.”

Not too far away. Six weeks later that phrase had a new resonance for me.

Six weeks later (in 1963), John Oaksey came very close to winning the Grand National on Carrickbeg. He lost to Ayala by three-quarters of a length.

Lord Oaksey was a multiple-champion amateur jockey, a journalist for The Telegraph, and broadcaster. He created the Injured Jockey Fund in England. His story above is extracted from his memoir, A Racing Life: Mince Pie For Starters 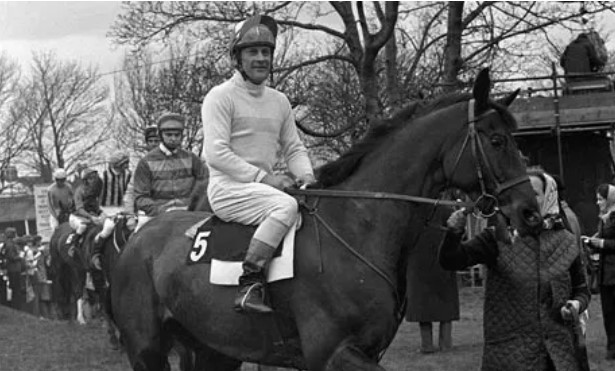