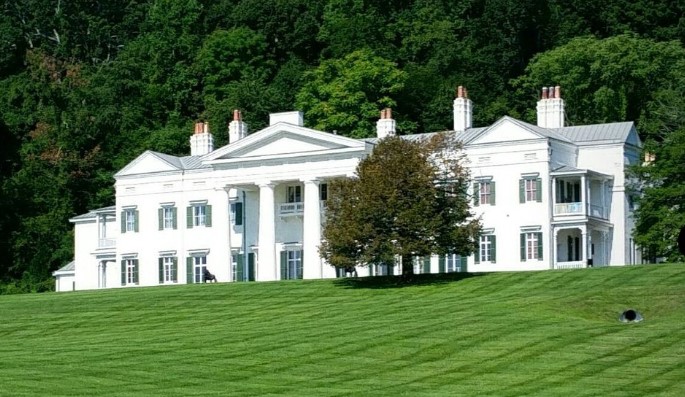 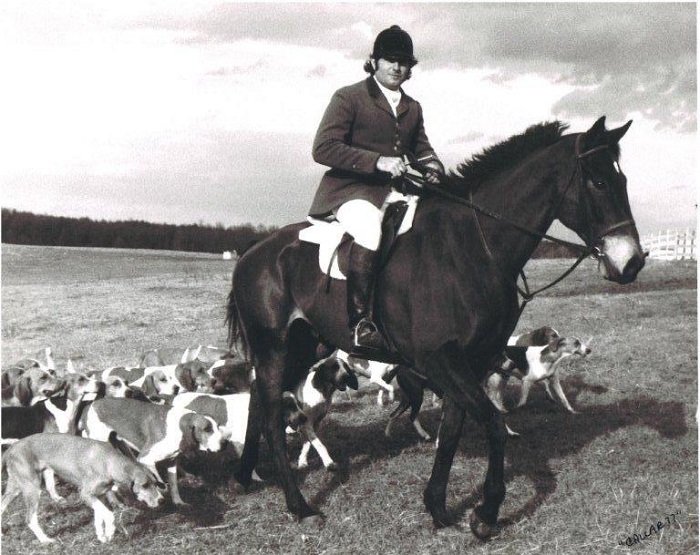 Huntsman Tommy Lee Jones and hounds of the Casanova Hunt, 1977

Tommy Lee Jones
Tommy Lee served as the professional huntsman for the Casanova Hunt (VA) for fifty years. His father was a professional horseman, and Tommy Lee began showing horses and hunting at a very young age. Hunting with many of the Virginia hunts, he met and became friends with many fine Virginia huntsmen such as Melvin and Albert Poe, Andrew Branham, and Duke Leach.

While hunting with Casanova in his early twenties, Tommy Lee was appointed to serve as a whipper-in to the Irish huntsman, Captain Ian Benson. When Captain Benson returned to Ireland in 1970, Tommy Lee was asked to carry the horn for Casanova. He has a fine eye for both horse and hound and has bred hounds able to win on the flags, yet full of the drive, stamina, and speed necessary to find and pursue the fox. He possesses that admirable Virginia trait of allowing his hounds to hunt the fox with minimal interference.

Tommy Lee managed the Upperville Horse Show―the oldest continuous-running horse show in the country―for thirty-five years and won the Horse Show of the Year award numerous times. He has also served as the manager of the historic Warrenton Horse Show for a similar period, was named Virginia Horse Shows Association’s Horseman of the Year in 1998, and inducted into their Hall of Fame in 2013. When the Maters of Foxhounds Association established Ian Milne Award in 2013 for Hunt Professionals who have shown the utmost dedication to the sport of foxhunting, Tommy Lee was the first recipient. 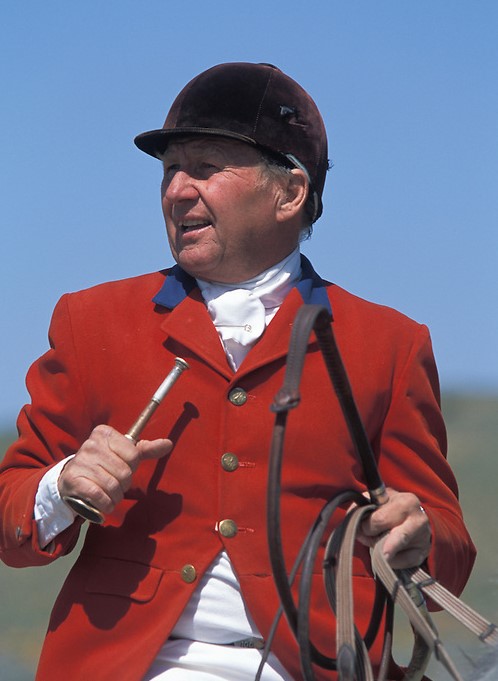 Davi Wendler
David served with distinction as huntsman of the West Hills Hunt (CA) for fifty-four years (1955 to 2009). Born in Collinsville in Southern Illinois in 1935, it was there that he began his lifelong love of hunting with hounds. He began hunting waterfowl with his family’s bird dogs and then raccoons and foxes with coonhounds. At nine or ten, David started to compete in western gymkhanas, and he continued riding, shooting, and hunting until he graduated from high school.

After a stint in the Army, based in Northern California, David visited one of his sisters near Los Angeles. She was married to Clyde Kennedy, one of the premier horse trainers on the West Coast. Kennedy was then training several Hollywood actors who had founded the West Hills Hunt after returning from World War II, among them Dan Dailey, Ronald Reagan, and John Huston. Kennedy introduced David to Dailey, and the hunt hired him as kennelman. In 1954 he was promoted to huntsman. The Hunt had been a drag hunt because of the mountainous areas available to them, but David soon began live-hunting coyotes. David also began breeding hounds more to his liking, crossing  Orange County ring-necks with July hounds he got from night hunters in Texas, Oklahoma, and Southern Illinois.

David showed great sport at West Hills and helped the other California hunts up their game as well. In the early 1980s, he helped Lynn Lloyd, MFH, and founder of the Red Rock Hounds in Reno, with her pack. David was also a fixture on the steeplechase and point-to-point circuit in California until a few years before his retirement. 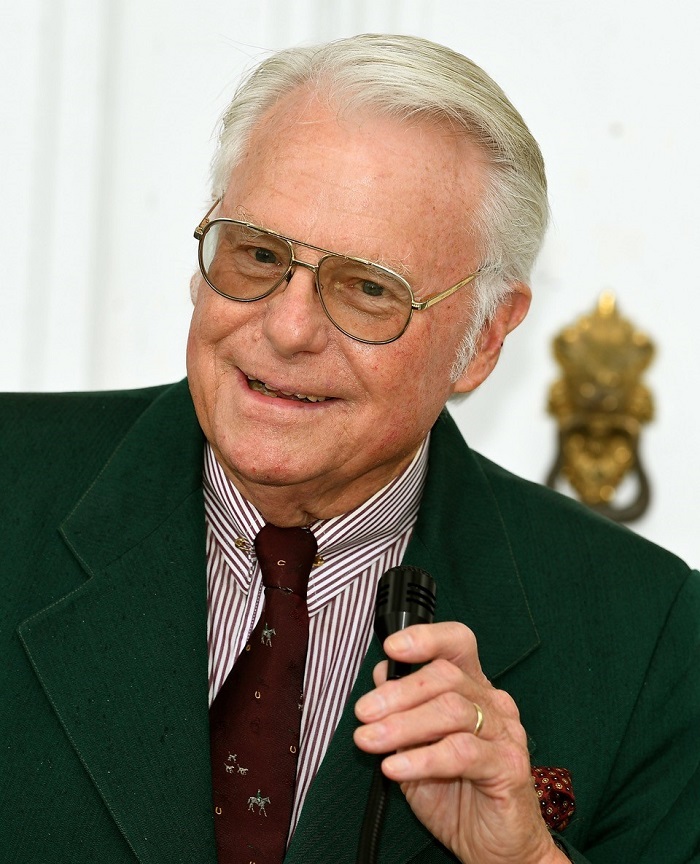 John J. ‘Jake’ Carle, II
Jake was born in 1938 to foxhunting parents. He began riding at age five on his Christmas present, a ten-hand terrorist named Charlie McCarthy. At age seven, he began foxhunting with the Keswick Hunt (VA) behind their inimitable huntsman Andrew Branham. There, Jake found his passion.

When he was ten, his mother founded the Raynham Beagles, and his hunting education expanded. It furthered in sessions with his father on kennel management and with Charlie Hughes on running the stable and whipping-in. Through grade school, foxhunting was a priority, and, on hunting days, studies were often set aside at the insistence of his father, a crusty but kind Quaker gentleman, who opined often and loudly, “Hunting is part of thy education, gawdamnit!”

Prep School interrupted hunting somewhat, but then came the University of Virginia and turning hounds to Keswick’s new Master and huntsman Roberts Coles, as Honorary Whipper-In. Hunting was such a priority (along with a bit of intercollegiate polo) that graduation took six years. In 1963, with Jake’s diploma finally secured, whipping-in became a full-time occupation; then, in the spring of 1964, Coles graciously offered Jake a Joint-Mastership.

Three years later, Coles retired and offered Jake his pick of the pack. Kennelman Joe Collins carried the horn; Jake whipped-in on weekdays and led the field (to him, an onerous job!) on Saturdays. With additional hounds acquired principally from Farmington, Deep Run, and a small private pack, the Keswick pack was slowly rebuilt and deer-broken. Albert Poe took an interest, provided sound breeding advice, and offered the use of Piedmont sires. Jake’s breeding program flourished.

In 1973 Jake took over the horn, heeding his father’s oft-repeated advice, “Hunt thy own hounds, gawdamnit!” Joe Collins assumed the role of Kennel Huntsman and First Whipper-In and excelled at it. Hounds accepted Jake from the start and immediately taught him that he knew absolutely nothing about hunting hounds and to leave it to them! Jake continued to breed along Piedmont and Middleburg lines, the blood of which melded well with the Coles, Goodman, and Brandywine blood in the Keswick kennel. His hounds had nose, cry, drive, and the desire to please. They were a joy to hunt and thrilling to follow.

In 1985 Dr. Joe Rogers, Bill Brainard, and Sherman Haight invited Jake to be a Founding Member of the Museum of Hounds and Hunting.


Art Exhibits
Sam Savitt (1917-2000), an accomplished and prolific American artist, illustrated more than 130 books during his fifty-year career, wrote and illustrated fifteen books, and co-authored two others. His Draw Horses with Sam Savitt is a classic instructional text on equestrian art, garnering him the position of official artist of the United States Equestrian Team. He painted portraits, illustrated advertisements and comic book covers, and also created a series of authoritative posters about horses, including his widely-sold “Sam Savitt’s Guide to Horses,” now in the Smithsonian Institution. Savit was one of the founding members of the American Academy of Equine Art.

‘Kathleen Friedenberg, who started her career as a veterinary surgeon in England, has a background in medical and veterinary illustration, including three books and twenty covers on the Chronicle of the Horse. For twenty years, she conducted an annual workshop on equestrian sculpture at the Kentucky Horse Park; in 2003, she taught the first of the Academy’s workshops at the University of Pennsylvania’s School of Veterinary Medicine at New Bolton Center. In 2018 Kathleen was elected “Dean of Sculpture,” winning the Academy's “Award of Excellence” for three consecutive years.

Admission to the Savitt and Friedenberg exhibition from Sunday, May 29 to June 25 is free. The opening reception on Saturday, May 28, is $40. Certain of the artists’ works will be for sale, with a share of the proceeds going to the Museum of Hounds & Hunting, North America, Nancy Bedford, Chairman.