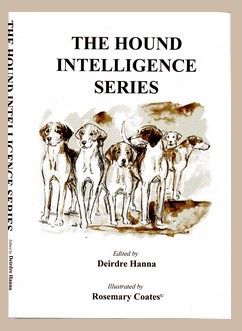 −From The Hound Intelligence Series published by Hounds magazine―an oversized 335-page collection of stories about remarkable and memorable hounds from around the hunting world.

Julie Whitlock McKee told me about her favorite foxhound at the Midland Fox Hounds (GA)―a hound that she walked as a puppy.

“He is a beautiful tri-colored dog hound who is as honest as the day is long. When the correct quarry is being chased, he is right there up front. He may not be the beauty king that goes to the shows, but if there is any doubting in the minds of the hunt staff as to the correctness of the pack, they look for Brecon to tell them if the pack is right. Which is quite handy in a pack that has a lot of young entry.

“He knows my voice and comes to the kennel window when he hears it. Of course, I call, ‘Who is the best hound in the kennel?’ and Brecon comes flying to the window. When hounds are let out of the trailer at the meet, Brecon will come over, jump up, and put his front paws on my foot in the stirrup. Then he’ll move off to the pack to do his job. At the end of the hunt, I try to get over and see him before hounds are kenned up. Again, as soon as he hears me, he runs over to see me, and then off to the trailer he goes. We do sometimes get in trouble when Mason Lampton, Joint-Master [and President of the Masters of Foxhounds Association of America] is having roll call. This would be at the end of the hunt when Brecon is hanging out with me instead of paying attention to him!

“One time out hunting, Brecon was bitten by a snake and he was going down fast. I was in a panic. He tried to bite anyone who got near him, so I jumped off my horse and ran over to comfort him. The whip said, ‘Don’t touch him, he is in pain and biting anybody that gets near him.’ As soon as Brecon heard my voice he began to drag himself over to me and sat on my feet with his head in my lap. I just kept petting him until the road whip could get there to give him some steroids. Thank God all was fine in just a few minutes after the steroid kicked in.

“When we go on hound exercise, he will trot along with me instead of the pack. Our kennel-huntsman Marc Dradge allows him to since that is how Brecon learned about horses. As long as I was there, he wasn’t going anywhere else. He is a bit spoiled as I sneak him little tidbits from the hunt breakfast. Once the hounds are asleep, I sneak over with a chicken tender or some other yummy and whisper, ‘Brecon.’ He will tiptoe over, making sure not to disturb any of the other hounds. If one of them growl, he stops dead in his tracks and waits until they stop, then continues over.”

Julie finished by saying that by the time he has eaten the second or third bit of chicken, the rest of the hounds smell it and wake up. Mason Lampton adds further insight into Brecon’s popularity.

“Julie loves Brecon, as she walked him as a puppy. He is a great hound who leads the pack on high-pressure coyote runs. He is the first to tell me that a puppy is running a deer which is invaluable. He is not a strike hound as I believe we might have intimidated him from drawing while deer-schooling as a young entry. He is remarkable in his discernment as to which hound’s voice has spoken. He flies to it if it is right, and he takes over the hunt. He is a wonderful hound who has an equally grand sister named Baffle. His pedigree is mainline Midland breeding, and it is no surprise that he is so outstanding.