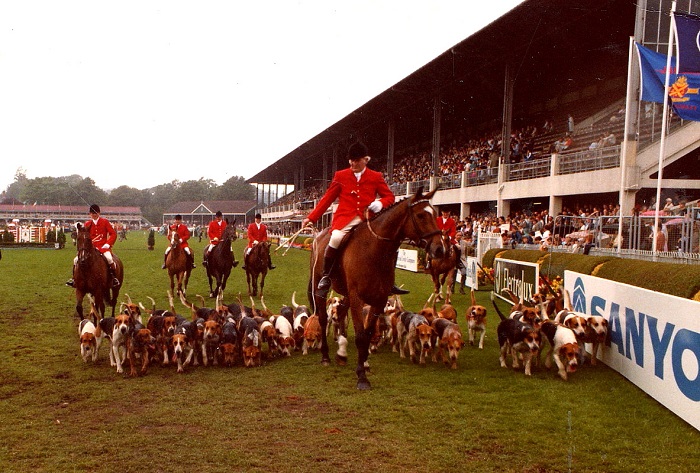 Former Master and huntsman of the Galway Blazers for forty seasons, Michael Dempsey celebrated his ninety-fifth birthday last week. And there are still some who remember him hunting Lady Molly Cusack-Smith’s Bermingham and North Galway Hounds even before that!

In fact, your FHL editor was in the field near Bermingham House one hunting day that would have cancelled any prognostication of this man ever achieving ninety-five years topside.

"As far up front as possible, I had an unobstructed view of Dempsey watching hounds as he galloped along an open grassy way. An unseen wire, stretched across the way stopped him throat high. His horse continued at the gallop, and Dempsey, spun a 270-degree circle about the wire—his throat at the center of the radius—until his chin released him to gravity’s force and allowed him to land hard on his backside. He got up slowly, remounted when his horse was returned to him, and continued hunting hounds for the rest of the day," recalled Fine.

Dempsey celebrated his birthday at the home of his son Tom, who had whipped-in to him for ten seasons before taking over the horn from Michael for another twenty seasons. Tom and his wife Mairead have been lovingly caring for Michael. A domestic science teacher, Mairead made a special birthday cake, and his nieces, Rose, a former Joint-Master, Carmel, and Joan joined in the celebration socially distancing on the lawn outside.

One of the highlights of the occasion was a poetic tribute that Joan penned about Michael's life from childhood: Autumn hunting in Moyode Wood, hunting with his idol Major Bowes Daly of Dunsandle House, his top horses Superman and Gavroche, to hunting all the County Galway packs—the Galway Blazers, Lady Molly O'Rourke's Bermingham and North Galway Hounds, and the East Galway. The tribute was arranged to a musical background by Carmel, a well-known Galway musician who performs at many of the social occasions in the West. Other highlights were Michael outracing his good friend Tommy Brennan in one of the first Hunt Chases at the Royal Dublin Horse Show, parading twenty-two-and-a-half couple of the Blazers’ hounds on two occasions in the Parade of Champions, and settling them on the bank without assistance by just using his voice.

His hunting trips to the USA were not forgotten: hunting with his friend Melvin Poe, huntsman of the Orange County Hunt in Virginia, and not being tempted to join all the spectators when Jackie Onassis had a fall as hounds were in full flight. Michael did not let Melvin out of his sight, and they were there when the pack marked to ground. Leaving the last words to Joan, she said that her uncle Michael was an unrivaled huntsman and horseman of his era, and predicted his name will go down in hunting folklore.

Happy Birthday, Master, from all those of us at home and abroad that have been privileged to hunt and enjoy spectacular sport with you in a Golden Era of hunting in County Galway.
***

Early in August, after the harvest, he’d couple old hounds to young.
Drawing them out with JJ and Tom, from under the Arch rushed the Ballymore hounds.
A childhood dream to hunt these hounds since first he followed Bowes Daly.
A young boy’s wish if strong enough can one day become his reality.

At four in the morning the day not quite dawning, his favourite time of the year, the clip clop of their horses breaking the silence, as they headed for Moyode.
In the thick undergrowth the cubs they awoke, followed on by hounds at full cry, their tongue was so strong yet their music so sweet, their dulcet tones hung in the sky.
Their morning over, a lot to mull over, home to a welcome fry.

He dreamed last night that once again he flew between Craughwell and Seafin.
Hounds shrill cry disturbing life in the stony fields ahead of them.
Beneath Daly’s cross having lost the line, widely feathering picked up again
Then straight and true over land he knew, reins in one hand he blew them on
Gavroche took the railway wall, sure of foot and brave
The field by now were losing pace, headed for Greenhouse gate
Up ahead they lost sight of him, sure he was away for Rahasane den
Steam rising in the October air, he blew to ground the quarry spared.

No stone wall too high, no ditch too wide, high tensile wire didn’t turn him
From bleak Turloughmore to the woods of Moyode, from Headford by the Corrib to The Eyrecourt
Demense, the land he respected, no farmers neglected.
From Athenry Square after the fair, to the last hurrah in Cawley’s, bar, he wasn’t averse to quenching his thirst with his favourite, tumbler of Paddys.

When hunting North Galway with Molly O’ Rourke, this country had none to compare.
She was widely known as the lady who carried the horn through the war
Her voice when raised could be heard in Belclare but she taught him a lot about heel and the hare.
The going was perfect, walls standing tall, the fox clearly viewed from afar.
The great Superman so aptly named, covered the country with incredible flair.
He safely will say from that time ‘til now, the likes of that horse has never been found.

The stock stood still on Redmount Hill the hounds fanned out before them
When Jimmy hollered “Gone Away” the pack followed close behind him
Though heavy of limb, he had bred in them excellent scenting noses, this was the reason, season upon season East Galway’s pack never looked back.
The sport and the craic, with characters to match equalled their lofty neighbours.
He led from the front a competitive bunch, close quarters with Bishop and Miley.
Business men, farmers and visitors alike, the challenge was just to get within sight, on a run from
Kiltormer with wire strung so tight, then away to Killimor a ten mile point.
I can personally say, I never again had the likes of those daring, carefree days.

In Dublin’s arena he paraded his pack, it’s spoken of still, the way they were drilled, to wait on the bank until he called them back.
The inaugural team chase, to Brennan’s disgrace, the man from the West boldly out raced him.
He rode point to pointers, trained jumpers and chasers, was known as a judge far and wide.
He chaired Loughrea Show and helped it to grow, to one of the best in the West.
Though stressful to run, it was always great fun, the camaraderie second to none.

Hunting trips to The States, great fun with his mates, in Ligonier a heluva time.
He was treated like royalty, on a visit to Orange County to ride with the great Melvin Poe.
The field watched in awe when he carried the horn and the hounds worked diligently for him.
He was mounted on board, a horse he had sold, one of many he’d sent out before him.
To the amazement of all when Jackie Onnasis took a fall, only the huntsmen kept their eyes on the ball.

Paddy and him played foxes and dens, sheep dogs their hounds they hollered around, drawing coverts and chasing hens.
When Mary Ellen gave out, it was time to look out, they had serious work to do then.
She was proud of her boys, the oldest her prize, she lived her life through them.
They both had their dreams, his worked out it seems, an envious life in the country.
Now spending his days in the place he baled hay, his brother Gone Away long before him.
Surrounded by family with sharpest of memories not his alone to muse.
From the ends of the earth, the followers he met, share those moments too.

Dedicated to my much admired Uncle Michael on your retirement. Unrivalled huntsman and horseman of your era . Your name will go down in hunting folklore.

Noel Mullins, a retired IBM executive, is a photojournalist, lifelong foxhunter, and author of The Dublin Horse Show, The Irish Hunter, In Search of the Kerry Beagle, and other books on Irish horse sport. A similar article was first published in The Irish Field.