A proud hunt with a proud heritage, but in the middle of this past season the Aiken Hounds suddenly found themselves without a huntsman. And just when the Aiken area is swelled with the northerners who migrate each year along with their horses to continue their sport through the winter months. The Masters needed a temporary huntsman and turned to long-time amateur whipper-in Brooke Miller, who had never before hunted hounds. 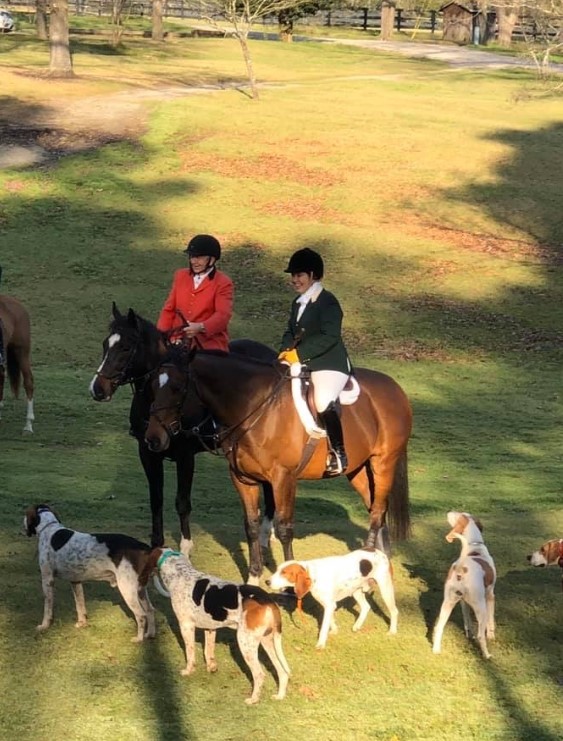 Brooke Miller and hounds with Whiskey Road huntsman Joseph Hardiman, one of the many in Aiken's hunting community who helped to make certain that Brooke succeeded in her new role.

The Hunt’s Situation
“Brooke was suddenly thrust into the position of temporary huntsman,” said Linda McLean, MFH, “and so many people in the community jumped in to help her. Whiskey Road huntsman Joseph Hardiman and former huntsman Darren Haeusler came and offered Brooke hunting horns and advice. She’s a really nice girl and everyone wanted her to be a success. Brooke hunted the hounds through January and February and she did a fine job...and then...Covid!”

Brooke Miller and those who pitched in to help her had solved Aiken’s immediate problem more than satisfactorily, but at season’s end the hunt still had to find an experienced huntsman to manage the breeding, whelping, the hounds education and fitness. Someone was needed to bring the hunting experience and carry it all forward.

The Huntsman’s Situation
By way of background, Chad Wilkes grew up in the Belle Meade Hunt country of north Georgia, where foxhunting is as serious and as much fun as anywhere in North America. His father, Gary, a longtime Joint-Master there and a practicing veterinarian, exposed young Wilkes to an intimate look at hunting and kennel management at an early age. As a young man, Chad whipped-in to Master and huntsman Epp Wilson. Aiken huntsman Chad Wilkes, Melissa, and children Lillian and Anabelle, both young gymnasts, at the kennels painting the Puppy Palace.

Wilkes has served as professional huntsman at the Hard Away Hounds (AL) (now Hard Away Whitworth Hounds) and at the Camden Hunt (SC), showing sport with style and confidence well beyond his years. He has also contributed superbly as Trial Huntsman at several Foxhound Performance Trials over the past few years.

This reporter has hunted behind Wilkes several times and it became quickly apparent that he has a special rapport with hounds. He allows them more freedom than the English huntsmen we see, which is a typical difference between the two styles of hunting. When hounds find and speak, Wilkes remains silent, allowing his hounds to work it out and settle to the line without distractions from him. Hounds accept their responsibility and fly to each other to honor the one that is speaking. In my view, he is one of the most talented young huntsmen in the game.

Last season, Wilkes was hunting hounds at Floyd Wine’s Saxonburg Hunt. Wine, however, after fifteen years as sole Master of the Saxonburg, was looking toward pulling back from the unrelenting duties of hunt management. Wine found the solution with Sean Cully, MFH and huntsman of the Rose Tree-Blue Mountain Hounds (PA) and MFHA Director for the Pennsylvania District. The two hunts merged recently, solving Wine’s needs, and Cully wound up not only increasing his Pennsylvania hunting country, but gaining Wine’s South Carolina country, kennels, and house near Aiken. Chad Wilkes was suddenly a talented huntsman without a pack.

How It Comes Together
That wasn’t a real problem for Wilkes, though, because he’s a huntsman with a day job; he’s been with Petco for six years. And it just so happens that Petco recently opened a flagship store in Aiken—a new concept for the company of which there are very few opened so far—and Wilkes is the store manager.

The serendipity to this unique situation continues. Aiken has a whipper-in, Brooke Miller, who has proven herself capable of filling in as huntsman on occasions when the regular huntsman is unavailable. Brooke will whip-in to Chad, manage the new barn at the kennel, and care for the staff horses. Strong backup for the part-time huntsman.

And Aiken is building a barn with bathroom and shower at the kennel property for stabling the huntsman’s horses and to help in Chad in his daily transition to Petco.

“I’m super excited,” said Wilkes. “I can exercise hounds early in the morning, then go to Petco. The kennels are only two miles from the store, and I’m here six days a week anyway!”

So, not only have the obstacles to a part-time huntsman been sorted out, but senior Master Linda McLean has acquired the huntsman who was her first choice all along—a man she’s known for many years from being so close to the Belle Meade country in neighboring Georgia.

Wilkes admits that he’ll face a learning curve, since he has never hunted a drag, but as in most elements of this deal, there are powerful offsets to that deficiency. Master McLean hunted the drag hounds for many years, and then there is her Joint-Master Larry Byers.

Byers, a former Master and huntsman at the Santa Fe Hunt (CA) (now the Santa Fe West Hills Hunt), relocated to Aiken a number of years ago. He whipped-in to Master and huntsman George Thomas at the Why Worry Hounds (SC), and in 2012 joined Linda McLean at Aiken as Joint Master. Byers leads the Second Field and has taken over management of the drag laying operations. Never having hunted with drag hounds himself before coming to Aiken, but knowing well the patterns of live hunting with hounds, he is well-equipped to train “his foxes” in laying the drag to best simulate the track of live quarry.

Every week during the season Byers hold a meeting at a favorite Aiken luncheon spot for the foxes and the huntsman. At the meeting he plans the drag routes for the upcoming meets and explains them to the staff. The huntsman needs to know the route so he’ll recognize whether hounds are right or wrong for their own safety. Byers may also instruct the “foxes” where to lift the drag to put the hounds at fault, thus forcing hounds to cast themselves and recover the line. By choosing a location to which he can get his field ahead of hounds, he can use the drag to educate field members about hound work.

Byers also sketches the routes on a map of the Hitchcock Woods for the staff—a solid line for the huntsman and field and a dotted line for hounds—which will be helpful to the new huntsman in learning the layout of the Woods and the odd names of specific landmarks and locations used by staff in communicating. For the benefit of staff, Byers also indicates on the maps where there may be planned surprises in the route. 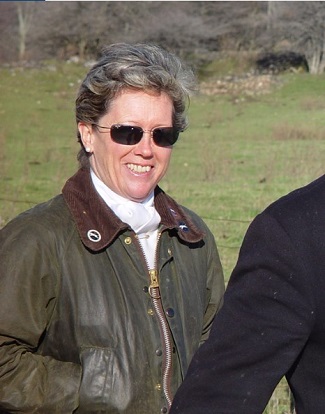 “Hounds are pretty smart, and we have to keep ahead of them,” Byers says, “or they learn the routes and tend to cheat!”

So Larry Byers’ weekly meetings, too, will be of great benefit to Chad Wilkes as he learns the country and the intricacies of hunting the drag hounds.