Then, as I have done for years, I would have stayed to the bitter end to watch the most exciting class of all—the Grand Championship class—after which I would have tried to interview a Master or huntsman of the winner as part of my regular reporting through the hound show season.

Back to reality. No hound shows, no champions, no Virginia Foxhound Show this weekend. What to write?

I decided to go back in time to remember one amazing foxhound. Back to 2007, the MFHA Centennial Year, and the Centennial Foxhound Champion at both the Virginia Foxhound Show and the Bryn Mawr Hound Show a week later—Potomac Jefferson —and examine his powerful legacy that ensued since that time.

That hundredth anniversary year of the founding of the Masters of Foxhounds Association—2007—was filled with celebratory sporting art exhibits, a huge hunt ball in New York City, foxhound shows and performance trials, field hunter competitions, with winners all over the country qualifying to participate in Virginia over the Memorial Day Weekend for the title of Centennial Champion, whether it be horse or hound, man or woman. The classes of all the hound shows that season were swelled with the best examples of foxhounds that could be mustered, along with their supporters. The year 2007 was a big deal.

Jefferson had been bred, entered in 2005, and shown that Centennial year at the Virginia Foxhound Show by then Potomac huntsman Larry Pitts. Jefferson was as strikingly handsome an American foxhound as this reporter has seen, and since that day he has passed his superior looks and conformation on to generations of grand champion foxhounds to follow—both male and female. Today, Jefferson's genes are to be found in American and Crossbred foxhounds from one end of the country to the other.

Fittingly, Jefferson ended his days in comfortable retirement with the man who bred him—Larry Pitts, now huntsman at the Bedford County Hunt (VA). Weary of judges, swooning females, autograph seekers, and pesky selfie-seekers, Jefferson spent his golden years just hanging out incognito, as you see. But he left his stamp on the American and Crossbred foxhound world. Jefferson’s Legacy
2011–2012
When Sandy Dixon put her Brazos Valley Catfish 2006 to a Potomac-bred bi*ch that she had entered as Brazos Valley Meadow in 2006, it was no chance encounter. Dixon knew what she was doing. She is Master and huntsman of the Brazos Valley Hunt (TX), and her success as a breeder of hound show winners was already established.

With this breeding, Dixon was starting with the best material. Catfish was Grand Champion of the Southwest Hound Show three years running: 2007, 2008, and 2009. On the distaff side, Potomac-bred Meadow brought a few credentials of her own when she arrived at Brazos Valley as a puppy. Meadow was by Potomac Jefferson, bred at Potomac by huntsman Larry Pitts. She won the Grand Championship at Central States Hound Show in Kansas in 2011.

The resulting M-litter from Dixon’s mating of Catfish to Meadow turned out to be nothing short of stupendous. Brazos Valley Mystic 2010 was Grand Champion of the Southwest Hound Show for three consecutive years starting in 2011, matching his sire’s earlier performance. Mystic’s litter-mate, Marley 2010, was judged Grand Champion at Central States in 2012.

2015
At the Carolinas Hound Show in 2015, Hillsboro Graphic 2014 was judged Grand Champion of Show. Graphic is a grand-daughter of Jefferson through her sire, Hillsboro Jethro 2008, a littermate of Potomac Baritone (above).

2016
Myopia Gammell 2013 was judged Grand Champion of Show at the New England Hound Show in 2016. Gammell is a son of Jefferson, bred at Potomac by Larry Pitts, and drafted unentered to huntsman Tony Gammell at the Keswick Hunt (VA) in exchange for another breeding. Tony in turn drafted the still unentered pup to his pal, Brian Kiely, then huntsman at the Myopia Hunt (MA), who named the hound for Tony. Brian, of course, is now huntsman at Potomac, which completes another circle, entirely! And speaking of completed circles, Myopia Gammell is now back with his breeder, Larry Pitts, having completed his seventh season of hunting with Bedford County’s two-day-a-week pack.

2017
At the Southwest Hound Show in 2017, Brazos Valley Precious 2016 was crowned Grand Champion. Precious was by Brazos Valley Mystic 2010 ex Molly 2010, thus receiving a double dose of Jefferson’s potent genes both top and bottom in her pedigree.

Dixon scored her second Grand Championship of the 2017 season, this time at the Central States Hound Show, where Brazos Valley Mudbug 2014, was judged Best in Show. Mudbug’s sire, Jett, was by Potomac Jefferson.

At the 2017 Virginia Foxhound Show, the coveted Grand Championship went to Orange County Kermit 2015. Kermit is all Orange County bloodlines on the dam’s side, but Potomac bloodlines on his sire’s side. Kermit is by Potomac Kadillac 2012, whose grand-sire through the tail male line goes directly back to Potomac Jefferson.

In 2018, Brazos Valley Playboy 2016, a litter-mate of BV Precious (above), was crowned Grand Champion at the Central States Hound Show. Playboy was by Brazos Valley Mystic 2010 and Molly 2010, respectively and going back to Jefferson through the same lines.

In 2018 alone, Jefferson 2005 is found in the pedigrees of three Grand Champions of Show—Central States, New England, and Southwest—all different hounds, different lines, but all with Jefferson and his genes in common.

Some readers who have gotten this far are no doubt thinking, ‘Ok, beauty is as beauty does; how about performance in the field?’ Well, Larry and Peggy Pitts—huntsman and whipper-in respectively—addressed that question for me because I knew you’d ask.

“Jefferson was always a nose to the ground, hard worker,” said Larry. “He was never a problem with deer or other riot. He found countless foxes for us.”

Larry then added what for me is one of the greatest measures of value in a foxhound—the ability to recover a lost line when the rest of the pack is at fault. That attribute is what makes the difference between, “OK, let’s call it a day,” and “Hark to Jefferson; forrard on!”

On more than one occasion at a loss, when Larry had begun collecting hounds, no sooner did he have most of the hounds together when he would hear a hound speaking perhaps a couple hundred yards away...Jefferson! He had recovered the line through sheer work ethic. Larry would lay the rest of the pack on and away they'd go again. “Jefferson was determined to work it out even in very difficult scenting conditions,” said Larry, “but he did not dwell; he hunted with plenty of drive.”

Besides Jefferson, “too many others to name,” Larry and Peggy say, but perhaps the best was Potomac Magnet 2007, a son of Jefferson out of Potomac Mallow 2003. Like his sire, Magnet had a deep booming voice and found many foxes in tough, thick coverts.

Another top hunting hound that came to the Pitts’ collective minds was Potomac Wilder 2011, by Jefferson out of Potomac Wildfire 2007. Wilder had an outstanding hunting career at Potomac and is another hound that came back to Larry at Bedford County where he was “a big help to us for three seasons.” Wilder is now retired and happy in his new status as “house dog.”

Potomac Jefferson, who left his stamp on the American and Crossbred foxhound world and proved his pre-potency beyond question, is a fitting foxhound to be remembered over this quiet Virginia Foxhound Show weekend. 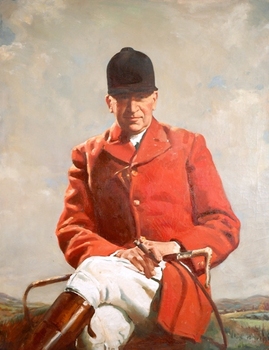 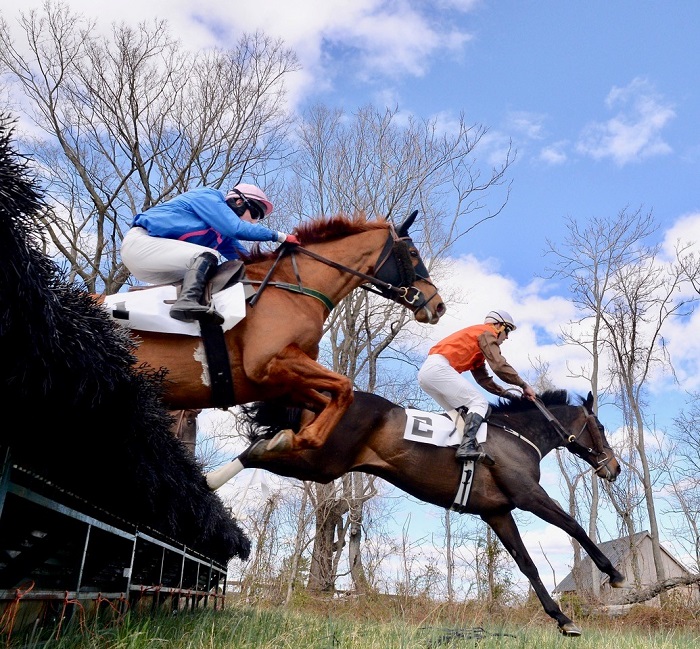