Artwork of Lisa Curry Mair: Unroll It, Hang It, or Lay It

Artist Lisa Curry Mair works in a unique genre from her studio in an eighteenth-century farm at the base of Mount Ascutney in Perkinsville, Vermont. She creates paintings, custom murals, and floorcloths on canvas in a folk-art style. Much of her work includes foxhunting scenes.

Mair’s commissions have come from Boston’s Museum of Fine Arts, several National Historic Sites, and hundreds of homeowners with specific ideas of what they wanted painted for their homes. Over the last twenty-five years of research, study, and “lots of mistakes,” she has developed the tools and knowhow to bring the client’s vision to light. Mair has attended classes and workshops since minoring in Art at Acadia University in Nova Scotia (while majoring in Mathematics and focusing on a career in riding). 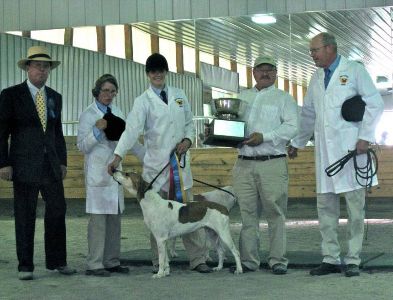 A Crossbred bitch rolled down to Massachusetts from the hills of Vermont and snatched the Grand Championship trophy from its habitual resting place at the venerable Myopia Hunt kennels. North Country Luna 2008 was judged Grand Champion of the New England Hound Show, hosted this year at the Berlin, Massachusetts home of Virginia Zukatynski, MFH, Old North Bridge Hounds on June 10, 2012.