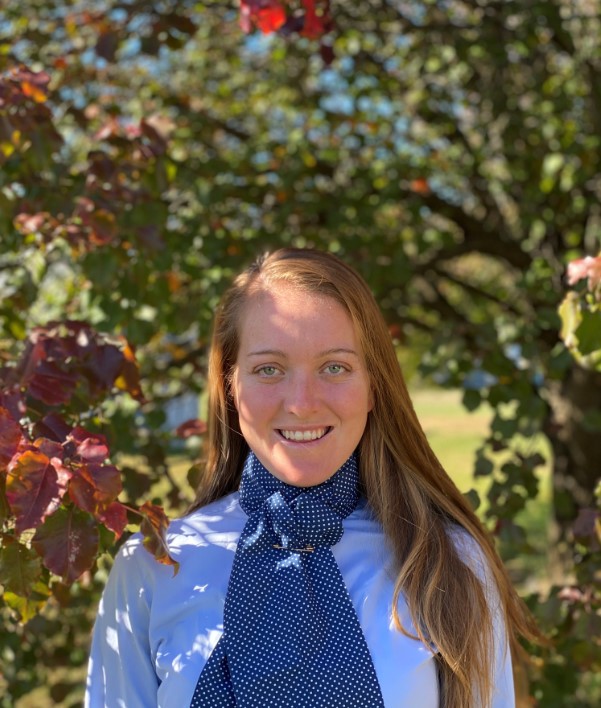 Denya Dee Leake, who made her first appearance in the hunting field on a lead line at age 6, is an amateur whipper-in to the Blue Ridge Hunt (VA) and owner/trainer of First Flight Equestrian. She models the blue birdseye stocktie in the latest fabric.   /   Tyler DeHaven photo

Five years ago we published a story about a little-known, yet colorful article of attire from foxhunting’s earliest days that deserved to be resurrected—the blue birdseye stock tie. Originated in England, it can be seen in eighteenth-century foxhunting prints if you look closely.

We enlisted two friends at the time: Judy Allen, who makes stock ties for tack shops in Virginia, and the late Karen Ewbank, a custom hunting clothier. They both loved the notion of bringing back this attractive stock tie, so we scoured the web for an appropriate fabric and offered it in our Shop.

Our efforts were rewarded. People enjoyed wearing it, retelling its history in the hunt field, and appreciated the good looks of this ancient style. We continue to receive orders every season, and though our fabric source recently discontinued, Judy searched and located a new source of an even more authentic fabric.

The first time I saw what I later learned was a blue birdseye stock tie, it was neatly tied under the huntsman’s scarlet coat. I had to ask myself, “What in the world is that man wearing about his neck?”

Here was an ex-Master, an experienced professional huntsman for world-class packs in England, Ireland, and America, who appeared to be oblivious to “propah” foxhunting attire. I’m referring to Hugh Robards, now retired from the field, but, during the late twentieth/early twenty-first century, one of the hunting world’s foremost huntsmen.

Robards is also an author, a student of the noble art, and possesses an extensive library. I thought he should have known better, but I didn’t want to embarrass him, so I didn’t ask.

It happens that I was the ignorant one, but, I suspect, I wasn’t alone in this particular matter. Robards, I learned, was wearing a traditional article of traditional foxhunting attire—a blue birdseye stock tie—under his scarlet coat. During his twenty-seven-year stint as huntsman for Lord Daresbury at the County Limerick Foxhounds (IRE), both he and the Master wore their blue birdseye stock ties through the autumn hunting season.

How many foxhunters of today had ever heard of such a thing, I wondered? The better question, though, was wouldn’t it be great fun to bring back this handsome stock tie into our own hunting fields? It was! With my new-found knowledge, and looking more closely at old hunting prints by eighteenth-century artists, I saw field members depicted in these scenes sporting blue stock ties under their scarlet coats. According to the well-read Robards, the Earl of Wilton hunting with the Quorn is shown wearing a blue birdseye hunting stock in Nimrod's Hunting Reminiscences; Mr. Thomas Assheton Smith, when Master of the Tedworth, wore one; John Peel had been drawn wearing one; and ''Nimrod,'' Charles James Appleby, also had a liking for this type of neck wear.

While the blue birdseye stock tie may not be considered “correct” during the formal season for professional hunt staff, Robards maintains that during autumn hunting it is better for staff than a collar and necktie because the stock tie is so much more useful in emergencies. And while field members of yore wore them with their scarlet coats, one has to wonder how they might clash with the various colors of hunt collars we wear nowadays. But surely, with an appropriate tweed coat during autumn hunting and later on informal hunting days, they are a handsome accouterment for both men and women. They also look smashing on ladies who wear dark blue coats during the formal season, and with gray Melton and black formal coats as well.

In Willy Poole’s Hunting: An Introductory Handbook, that most knowledgeable and outspoken English writer/reporter states, “A white tie is normal [during the formal season], although you will see some aged toffs who still wear a blue birdseye stock tie. These went out of general wear before World War I, but they are still correct if you have the style to carry them off.”