Badgering: A Fund Raiser for the Hunt 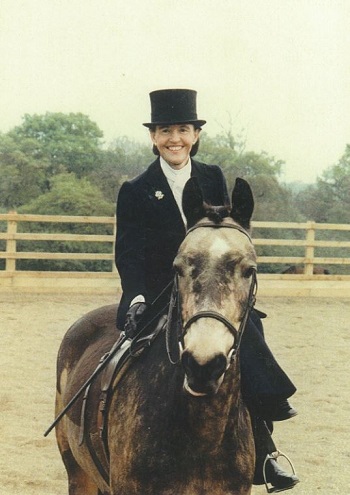 *Many hunts are continually on the prowl for a new fund raising scheme. Here’s a game from Britain that may raise funds, but if the members get to brawling don’t blame me.*

The idea of using badges to raise hunt funds was the brain-child of our Hunt Chairman and this is the way he made it work.

Each member was issued a badge at the start of the season. The badge cost £10.00 and the scheme was to last a year, until the start of the next season. According to the rules, all members had to buy a badge and show the badge at anytime, anywhere, when challenged by another Hunt Member, who also had to show their badge at the same time. Some minor points eased the situation for the ladies. Whereas a man had to produce his badge from a pocket, wallet, or coat, ladies could keep them anywhere on their person, as well as in their handbags or shopping bags.

Fifty pence was the fine for non-possession, and £10.00 to replace a lost badge. The money was paid in to the hunt by the challenger. Many people were caught several times, when on occasion their memory failed them, haste got the better of them, or they were forced to change plans (or pubs) when discovering they had left their badge at home. A member could only be caught once in twenty-four hours despite several challenges. One luckless young lady came out one evening badgeless and was immediately caught. Then, as the celebrations went on until the wee small hours, she was successfully challenged again, it being another day.

Some people were caught in bulk. The lady publican at the most popular pub in the Hunt Country waited patiently by the swimming pool then caught half a dozen members in their swimming shorts as they came out of the pool. She had her badge in her swim suit. Eleven members, in football clothing, were caught during the interval at an inter-hunt football match!

Our terrier lady—my mother (known as Mrs Mac)—who did the terriers on Tuesdays, now takes up the story:

“So there it was,” she said. “Fifty pence while crossing the stepping stones in a river; fifty pence when climbing out of the swimming pool; where next, I wondered.

“Next was to be by the edge of a grave. There we stood during the solemn funeral service with no one moving, until I got a nudge from the Chairman. I was horrified and told him he should not ask me for my badge here, of all places. He said that the deceased would have approved as he was always worried about bringing money into the Hunt. With these words, he considered his thoughtless manners were excused.

“On Tuesdays I felt comparatively safe as the Chairman of the Hunt ran the Mobile Library for the County and worked on Tuesdays. So one Tuesday, the huntsman had asked me to take the terriers to the end of a drain where the water came out in a waterfall ending in a deep pool. As I slithered down the bank to my horror I saw the Chairman, up to his waist in water, and blocking the drain with his broadness.

“He asked me if I had my badge—not if I had the terriers, of course not. I asked him what on earth he was doing here on a Tuesday and he told me he was having a day off, ‘to catch you out,’ he said.

“For me it had been an extremely expensive winter, and in the end I tried to avoid anyone associated with the Hunt. I dodged down side streets in the town and even changed queues in the bank. But even the bank cashier was on the Hunt Committee. Finally I decided I had had enough and went to stay with my daughter who lived on the other side of England. Here I would be safe, I thought, and my paranoia about badges gradually subsided.

“I judged the Terrier Championships and terrier shows in the east of England and began to relax. However, one day when we were traveling to Bedford I saw a straw-laden truck overtake us. Now there was nothing unusual about this; straw is often carried from East Anglia to Wales. However, I saw the lorry had Brecon licence plates. Then I saw the driver pull in at the cafe ahead of us where we too had planned to stop. As the driver got out I recognised him. It was none other than our huntsman who drove for a haulage firm in the summer. “I told my daughter I knew him (as she was puzzled because he appeared to be waving something at me). I told her I knew just who he was. He’s our huntsman, he’s waving his badge at me, and I’ve left my badge in Wales!

“When I returned home a polite request from me to a farmer to produce his badge (as he sweated away cutting a thorn hedge) produced a very disgruntled reply.

“I’m fed up with this b....y badge business,” he yelled, but great supporter that he is, I knew he’d be the first to volunteer if we started some other fiendish scheme next winter.”

My mother finished by saying that ‘badgemail’ rather than ‘blackmail’ certainly paid off.

The scheme produced a lot of good-natured camaraderie and jollity. It brought people together—even the shyest of people. They could always ask a hunt member they did not know well to show their badge (that is, if they had theirs on them at the time). The scheme played an important part in our strung-out rural community and certainly livened up the sometimes dull moments for car followers on the many, many freezing winter days.