If you are in Montana, you need to hunt with the Big Sky Hounds. Great hounds, great country, great people. It is, as their website says, “Foxhunting Montana-Style.”

They are the real deal.

I was lucky to be in the Bozeman area for their opening weekend and celebration of their 10th anniversary. I rode Friday, their “cowboy up” day. The night before, Joint MFH Lori Dooley let us park our fishing/hunting van at her barn, and that morning she put me on a great ex-racehorse named Mission.

We met on the edge of a farm above Three Forks, Montana. There were untold thousands of acres of mixed wheat fields and rangeland. My English saddle was in the minority, as most of the riders, including Renee Daniels, joint-MFH/huntsman, rode western. Don’t ever say you can’t ride fast and far in a western saddle!

I was honored to be invited to ride with Renee. She has put together a crack pack of hounds, including Lincoln, who won last year’s Western States’ Performance Trial (and then competed in the 2022 National Foxhound Championship in North Carolina).

Her hounds put on a clinic of cold-trailing in open dry country. So impressive.  And Renee understands the need to entertain the folks that are riding in the second and third flights (most riders!) Whenever possible, we waited for them to catch up, and she told them what was going on.

After the hunt, there was a wonderful breakfast. That night, Liz and David Richards let us park the van in an Aspen grove beside a creek and a cabin. The next day, the Richards hosted a hunter pace on their farm north of Belgrade. It was well-attended, and a great way to lure people into foxhunting.

The weekend continued with parties and a formal hunt on Sunday. But we had to move on. There were trout to catch and birds to shoot. From Renee Daniels:  If you want to do something authentically western, next May we’ll be visiting our country in the eastern part of the state and having a week-long “Celebration of Western Foxhunting” May 13-21 and will stay for the World-Famous Miles City Bucking Horse Sale. We hunt some incredible (huge) ranches over there and have gotten to be very good friends with the ranchers, so we often help with their cattle, sometimes branding, sometimes gathering – depends on when we go. We’ll parade hounds in the big Main Street parade during the rodeo weekend.  A couple of years ago we even put together a syndicate to bid and buy a bucking horse together, and then we sent him down the road with a stock contractor. It’s a big time. And we can fix you up with livery horses! 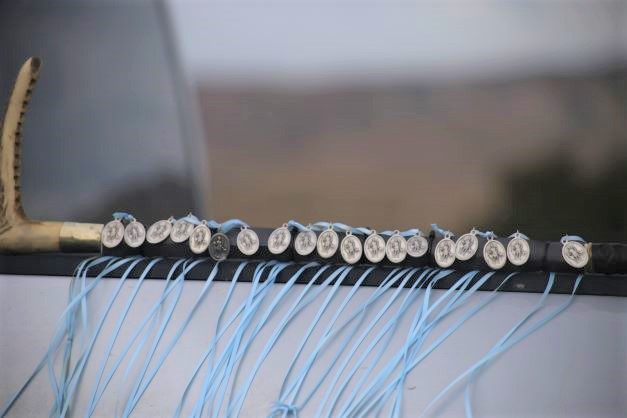 +1 # Catherine Evans 2022-12-28 13:09
Great article Fred - I say we all organize for a Big Sky Hounds Extravaganza in May!
Reply
Refresh comments list
RSS feed for comments to this post