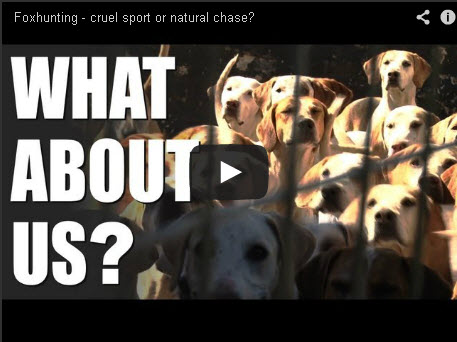 The Countryside Alliance (UK) has produced a new film that attempts discourse on the hunting debate in a calm and measured way. Titled Foxhunting: Cruel Sport or Natural Chase, the film takes the position that the hunting issue in England was not resolved by the Hunting Act as passed.

Countryside Alliance President Baroness Mallalieu, a forceful and most articulate member of the House of Lords, appears in the film, as does Exmoor Huntsman Tony Wright and Devon farmer Giles Bradshaw. Mallalieu led the fight against the Hunting Act in the House of Lords and says that many of the peers that voted for the act at the time regret their vote now. Even Tony Blair, Prime Minister at the time of passage of the Hunting Act, admits in his autobiography his regret in supporting the bill and believes it was a mistake.

Wright was one of the few huntsmen actually tried under the Hunting Act and was, after much time, expense, and personal trauma, cleared of wrongdoing.

Bradshaw is famous as a self-acknowledged breaker of the law by his refusal to shoot and kill deer that his dogs chase away from his young tree plants. He is not pro-hunting, but he views the law as idiotic in its current form.

The film departs from the hysterics that often accompany both sides of the hunting debate and makes a compelling case for the countryside.