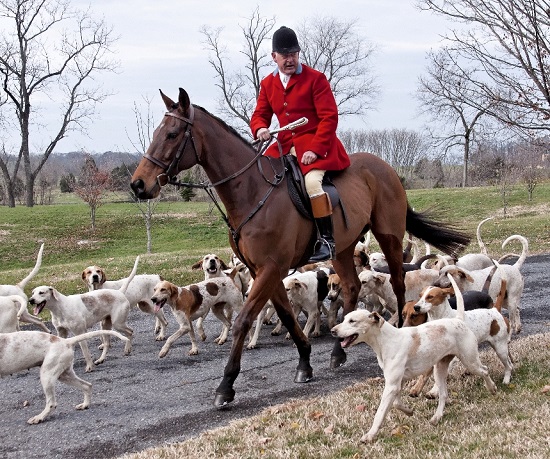 Huntsman Dennis Downing has moved from the Montreal Hunt (QC) to take up the horn at the Saxonburg Hunt (PA). That position became available when former Saxonburg huntsman Hugh Robards decided to make a move of his own.

Downing has been at Montreal for just one season after having hunted hounds at the Blue Ridge Hunt (VA) for eleven seasons. His current move is of special significance to him as both he and his wife Sue are now U.S. citizens.

“I’m very pleased to return to the States as a citizen,” said Downing. “And I’m happy to be working with a smaller hunt, but one with a very enthusiastic membership.”

The British-born and -trained huntsman has been in professional hunt service for forty-one years. Starting in 1972 as second horseman to the North Cotswold, Downing went on—as is the custom in English hunt service—to whip-in to six hunts over a ten-year period: the Croome, East Sussex, Llangibby, High Peak, Pendle Forest and Craven, and Meynell.

He carried the horn for fifteen years in England for the Llangibby, South Tetcott, and Croome, before moving to the U.S. as huntsman to the Mooreland Hunt (AL). There he discovered a new quarry—the coyote! He remained at Mooreland for three years after which he moved to the Blue Ridge.

Downing is no stranger to Saxonburg MFH Floyd Wine. “I’ve known Dennis for ten years,” said Wine. “He sent me drafts from the Blue Ridge. I know he’s a solid individual and a good man for hound breeding.”