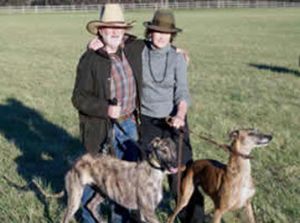 Nicolas Hartung and wife Ann with two of their lurchersNick Hartung, former huntsman and farrier, passed away on May 17, 2012 at his home near Staunton, Virginia. Nick suffered respiratory disease commonly referred to as “Farmers Lung” in his native England.

Nick was a farrier of great repute, commuting to Maryland for most of his business around the Pimlico Racetrack. Previously he had been professional huntsman for the Goshen Hounds (MD) for eleven seasons.

Nick started his hunting career with the New Forest Buckhounds in England. An opportunity developed in The States with of an offer of employment from Clayton Emig Doing, MFH of the Antietam Hounds in the panhandle of Virginia, Pennsylvania, West Virginia, and Maryland. The hunt’s name was taken from that defining epic battle during the American Civil War. Nick came to Antietam as kennel huntsman and first whipper-in.

After a season there, Nick moved on to be kennel-huntsman for Richard Moran, MFH at the Middletown Valley Hounds in Maryland, where he stayed for six seasons, before taking up the horn at Goshen.

He will be greatly missed by his many friends, and especially at the helm of the twice yearly lure coursing events held at his home at Five Thorns. # C. Thompson Pardoe 2012-05-23 20:02
Nick was a fine horseman, outstanding huntsman, and a very competent farrier. I was privileged to call him friend and to have him for my introductory seasons of foxhunting. One could hardly have had a better mentor.

TomP MFH Goshen Hounds
Reply
# Maddy Carolan 2012-06-05 11:43
Nick was a gentleman, a very good farrier, but most of all a treasured friend. For nearly 20 years he cared for my horses, had dinner with my family, and we enjoyed the hospitality of his Boxing Day Parties. It is with great sadness that I acknowledge his passing. Till we meet again Nick.