Putting a foxhound and four foxes in a room together is not a situation you would expect to end well.

But as the case was at LEO Zoological Center in Greenwich [CT] last month, nature doesn’t always follow the rules.

The conservation center...enlisted the help of Greenwich-based Adopt-A-Dog in search of a surrogate mother for the four foxes, whose mother had a history of eating its young.

Mama and her six puppies were located at a...shelter in North Carolina. Adopt-A-Dog members drove through the night to rescue Mama and her young and arrived back in Connecticut just in time for the birth of the fox kits....

“The irony that it ended up being a foxhound-type dog was pure coincidence,” said Allyson Halm, president of Adopt-A-Dog.

Mama quickly became a caring mother for the foxes.

“She was so kind and gentle,” said Marcella Leone, the conservation center’s director.

A nocturnal animal found in the Sahara, the North African fennec fox is the world’s smallest species of canine—the biological family that includes wolves, foxes, and domestic dogs. Fully grown, the fox weighs only about 1.5 to 3.5 pounds....

Like all of the animals at Adopt-A-Dog, Mama and her puppies are looking for loving homes. 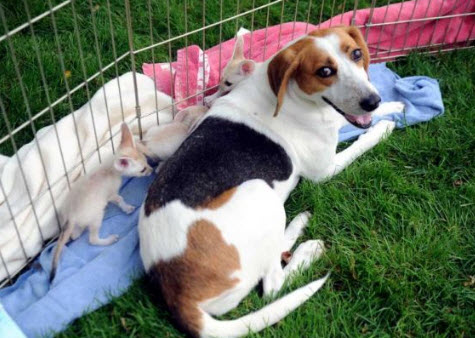