The new huntsman for the Hamilton Hunt (ON) is Robert Howarth, son of a Derbyshire dairy farmer. Robert went on his first hunt at the age of seven, when his mother took him a-pony with a lead rein. Within a year he was riding on his own, never missing a Saturday hunt.

He was contemplating hunt service as a career, and his chance came when he inadvertently broke the rules of etiquette at fourteen. Robert explains that he had a good pony which overtook the Master. The Master's horse stopped at a fence and Robert kept going, which resulted in him being sent home for bad behaviour! Afterwards when he went to apologise to the Master, he ended up being offered the Master's daughter's troublesome pony to control. So began his introduction to hunt service.

He left school at the age of sixteen to become second whipper-in at the Belvoir for two seasons under huntsman Jim Webster. For the following two seasons he was second whipper-in with the Meynell and South Staffordshire before going north of the border into Scotland to whip-in at the Linlithgow and Stirlingshire, where he stayed for three seasons. After this he went to the Lane Fox family at the Braham Moor as first whipper-in for three seasons before returning to the Meynell and South Staffordshire as first whipper-in to David Barker for seven seasons.

Robert then had eleven seasons as professional huntsman to the Holderness. He enjoyed working with the breeding of the Old English foxhounds, which he found most rewarding. With a group of friends, he also cycled one thousand miles around Ireland to raise money for the Martin House Hospice. He visited the Royal Highness the Prince of Wales at Highgrove and hunted on several occasions with His Royal Highness. After twenty-seven seasons of hunt service in England, Robert decided to go to Canada to the Hamilton Hunt, located in Caledonia, Ontario. He took with him Liberty, a Holderness Old English foxhound.

In September, four of Robert’s foxhunting friends came to Ontario for a couple of days of hunting and socializing: huntsman Brendan Dolan and whipper-in Deirdre McDonald of the County Sligo Harriers (Ireland); huntsman James Mee from the South Leitrim Harriers (Ireland); and the author from the Holderness in Yorkshire (UK), a friend of both Robert and his daughter Georgina and a regular puppy walker who had walked Liberty.

The first day of hunting took place at Broad Road in the Hamilton Hunt's Oneida country. The field of twenty-three moved off at nine a.m. enjoying a pleasantly warm morning. Hounds drew enthusiastically for over an hour with the rising temperature making scenting conditions quite challenging. After working their way through a large field of corn, field and visitors were treated to a view of a very large coyote the pack had pushed out.

Hounds ran south through the fields and pastures of landowners Dale and Larry Armstrong. After a fast forty-five-minutes with only two checks, the coyote managed to give hounds the slip in the swampy area to the south of Indiana Road. It was a great introduction for the visitors to hunting Canadian style, and all enjoyed the delicious tailgate breakfast which followed, put on by Andrea Dreger and Aline Verbunt.

The next day’s meet was at the Hamilton Hunt kennels. A smaller field headed off into the east country, hounds drawing through Steve Quinn's poultry farm, known to some as "The Coyote Buffet!" Hounds found to the south, the woods rang with music, and hounds finally accounted for the coyote in the bush area behind the McBay Farm, a rousing chase through the woods.

"Cathy's Gulch" accounted for a few of the field who chose not to brave the steep banks and deep water, and a smaller group headed off to draw the corn field at the north of Steve Riis's farm. Another coyote was found there and was hunted to the east towards Onondaga Twon Line. In the woods behind LaFortune Park the quarry swung back to the south towards Little Creek Farm, heading into the heavy growth along the railway line. It was almost to Brant Road 22 when the Hamilton Hunt hounds caught up to the coyote and accounted for their second of the day.

The Hamilton Hunt hounds are in superb form this year, ably guided by huntsman Robert Howarth, and gave a great couple days for the Irish and Yorkshire visitors. They saw some of Canada, viewed coyotes—an unfamiliar quarry—and enjoyed great sport in good scenting conditions.

Click for a Gallery of Photos Helen Laverack Photos 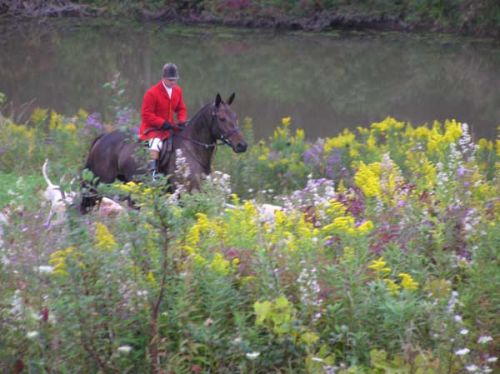