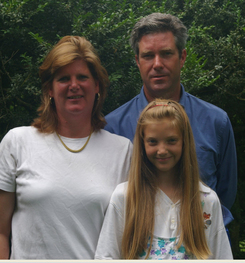 Don, Sara and Alice Maley at the Virginia Foxhound Show / Karen Kandra Wenzel photoDonald Maley, an experienced honorary whipper-in with several Virginia hunts, has joined the ranks of the professionals. He will whip-in to the Potomac Hunt (MD) foxhounds starting this season.

Maley, a farrier, has whipped-in to Oliver and Michael Brown at Rappahannock, Troy Taylor at Middleburg, and Billy Dodson at Thornton hill, all over a period of twenty-two seasons.

“I’ve been doing it for free for so many years, I decided that if I’m going to keep at it I might as well get paid,” quipped Maley. Then he turned serious.

“I’ve been a horse shoer for twenty-five years,” he said. I shod three-day horses on an international level, traveling the world. Now I have a daughter growing up, and I’ve done enough traveling. I think I have what it takes to hunt hounds eventually, and that’s what I’m aiming for.

Maley will be whipping-in to huntsman Larry Pitts at Potomac—a highly regarded huntsman and a brilliant breeder of foxhounds.

“I’m learning so much from Larry already,” Maley said. “I need to learn the kennel side of hunting—breeding and raising hounds, and Larry is helping me a lot.”