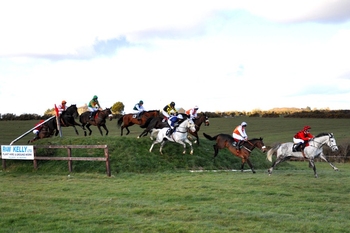 The Killinick Harriers Point-to-Point Races in County Wexford, Ireland are probably the last point-to-point bank races still run in Ireland. Traditionally, point-to-points featured members’ and farmers’ races that were run over natural fences such as the double bank fence in the photograph. Now most Irish point-to-points are run over standard chase fences.

Martha C. Wadsworth, Ann Morss, and Sarah Batzing-Cole, all from the Genessee Valley Hunt (NY), had traveled to Ireland for the wedding of Island Foxhounds huntsman Mark Ollard to Clare Lambert. While there, the American trio took in the Killinick Harriers Point-to-Point races and also rode with the Premier Harrier Hounds in the Saint Patrrick’s Day Parade in Cashel, County Tipperary. Prior to the wedding, Martha hunted with the Killinick Harriers, the Premier Harriers, the Island Foxhounds, and the County Clare Hounds.

In the photo are (l-r) Ann Morss, Jack Lambert, Emer Mullins, Martha C. Wadsworth, and Sarah Batzing-Cole. Ann Morss and Martha Wadsworth are whippers-in at the Genessee Valley Hunt; Jack Lambert, 79, father of the bride, is a well-known Irish Draught Horse stallion master and breeder; he hunts his five stallions with the Killinick Harriers. Emer Mullins is the author’s wife. Sarah Batzing-Cole is a dairy farmer in the Genessee Valley. 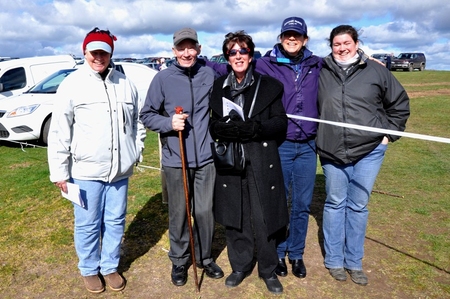