Foxhunter Has Best in Show at Westminster 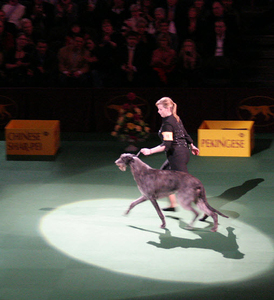 Foxhunter Scott Dove's Foxcliffe Hickory Wind Is Best in Show at Westminster Kennel Club         Jack Grassa photoFoxcliffe Hickory Wind, a Scottish deerhound bitch owned by foxhunter Dr. Scott Dove, his wife Ceil, and Sally Sweatt, was judged Best in Show at the Westminster Kennel Club in New York yesterday, February 15, 2011. Hickory is the first of her breed ever to capture that honor at Westminster.

The news clips on TV showed her to be not only a magnificent specimen of a dog, but an astoundingly beautiful mover. Watching her trot across the ring, one would think she was filmed in slow motion—floating effortlessly—were it not for the legs of her handler doing double-time beside her!

Scott Dove is a small animal veterinarian in Virginia with special expertise in reproduction and has been retained in that capacity by foxhound breeders here in North America. Scott, lives near Flint Hill, Virginia and is an honorary whipper-in for the Old Dominion Hounds.

Crowned on Tuesday night, Hickory was the toast of New York City on Wednesday. She appeared on the Today Show, had filet mignon at Sardi’s, opened the New York Stock Exchange, met Donald Trump, was on Fox and Friends, and Martha Stewart!

“Ceil said it was like walking around New York with Madonna,” Scott continued. “Someone would shout, ‘There’s Hickory,’ and a crowd would cluster around to meet and pet her.

“It’s astounding how many people are truly excited about Hickory’s win at Westminster. I wouldn’t have believed it. Our house is full of flowers and more fruit than we can eat.”

A Regular Dog
When Hickory isn’t showing, she lives at the farm with all the other deerhounds. She chases rabbits and deer, and—unheard of for a show dog of her stature—she has even been lost on occasion.

Scottish deerhounds hunt by sight, and such is their concentration that when they lose sight of their game in the woods they suddenly stop and have to ask themselves, “Where am I?”

“After her first big win she came home and chased a bear,” Dove recalls. “Yes, it’s a bit of a worry, but we like to give all the dogs some time off the lead. Ceil exercises every dog every day, either on foot or on the ‘Gator. They’re fit. When judges put their hands on our dogs, they can feel it.”

Recalling Hickory’s extravagant and breathtaking way of moving, one realizes that fitness is surely part of the equation for her success.