A Season of Field Hunter Competitions

At the start of every hunt season, several field hunter competitions showcase the skills of hunt members and their mounts. The nature of our sport doesn’t usually lend itself easily to competition, so each venue has come up with creative ways to quantify the skills needed to ride to hounds. Some competitions lean more towards jumping skills in an arena, while others try to keep as close to the hunt field as possible. These competitions can be a fun way for members to tune up their mounts for the hunt season. A few of the unique tasks required from competitors during individual rounds are opening and closing a gate while mounted, dropping a rail while mounted, halting from a hand gallop, dismounting and remounting from a stone wall, blowing a horn, and cracking a whip to name a few. Usually, only hunt members in good standing with their hunt clubs riding horses that are considered to have been fairly hunted are allowed to compete.

The Virginia Field Hunter Championship includes a mock hunt and is open to just two members from each of the Virginia hunts. Off the track Thoroughbreds have a Field Hunter division in the annual Thoroughbred Makeover event held at the Kentucky Horse Park. The Pennsylvania National Horse Show’s Hunt Night is always a prominent showcase of field hunter skills in an indoor arena. The Theodora A. Randolph Field Hunter Championship Finals is judged over a week of hunting at different Virginia hunts cumulating for a finale held in conjunction with the Virginia Fall Races. And the Warrenton Horse Show’s Hunt Night has the ever-popular Staff Class and Hunt Team Class in an outdoor ring under the night sky.

Many hunt members thrill at competing with their foxhunting mounts, so these competitions are always popular. This year, several hunt members have had a banner year at multiple competitions. Devon Zebrovious of Piedmont Fox Hounds Hunt in Upperville, Virginia, placed high at three events. Cameron Sadler, MFH of Moore County Hounds in Southern Pines, North Carolina, won blue ribbons at two events. And Joel Merle-Smith, MFH of Keswick Hunt Club in Keswick, Virginia, shared horses with his wife Nicolette to have success at three of the competitions.

Held at the Foxcroft School in Middleburg, Virginia, the Virginia Field Hunter Championships was open only to Virginia hunt clubs. The competition started back in the 1950s.  Each Virginia hunt club nominated two riders to compete. This October 23, 2022, there were approximately twenty-five riders from thirteen hunts that rode in a mock hunt. The top riders from the mock hunt were then invited to the outdoor course for the individual round showcasing various skills needed for the hunt field.

On October 17, 2022, the 76th annual Pennsylvania National Horse Show in Harrisburg held its popular Hunt Night under the bright lights of the indoor arena. This show is one of the largest indoor horse shows in the country. Keswick Hunt Club won Hunt Night Champions with their seven members accumulating the most points over the other hunt teams competing from eighteen different hunt clubs. This was the tenth time that Keswick has won the championship. There were over a hundred riders in total competing in the various hunt classes that night. Joel Merle-Smith, MFH, riding his Thoroughbred Breezy (Winter Storm Warning), and Nicolette riding her homebred Fortune Cookie were both on the winning team for Keswick.

The horse show also features a very competitive sidesaddle division. Devon Zebrovious (Piedmont Fox Hounds) rode Tortuga, owned by Brenda Madison, to win Champion Ladies’ Side Saddle Hunter. Zebrovious has dominated this division in recent years, as she has won the Champion Ladies’ Side, Saddle Hunter, three other times with her now-deceased horse, Quest. Last year she was Reserve Champion with Tortuga. 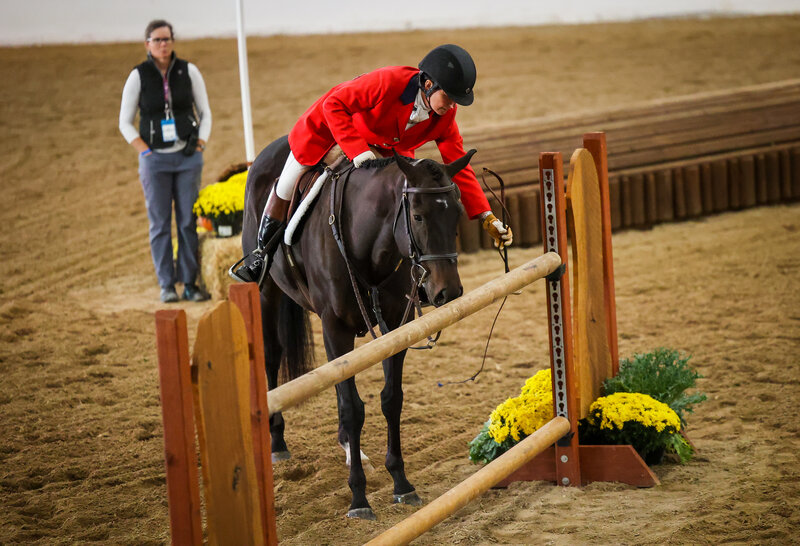 Cameron Sadler and Mike Mike are wonderfully Zen during the Thoroughbred Makeover Cameron. Photo by CanterClix.

The Kentucky Horse Park in Lexington, Kentucky hosted the finals for the Thoroughbred Makeover on October 15, 2022. The Thoroughbred Makeover was created by the Retired Racehorse Project to inspire a second career for racehorses after they have left the track. Of the ten divisions or sports that are part of the event, the Field Hunter division is always popular in the makeover. Riders had to first qualify at regional events before they were invited to participate in the finals. The Field Hunter division consisted of a mock hunt with Iroquois Hunt and an individual round in the Park’s indoor arena.

This year Cameron Sadler, MFH (Moore County Hounds) won the Field Hunter division on her Thoroughbred, Mike Mike. Trained by Sadler, Mike Mike (Handsome Mike) is a 2016 gelding that made 29 starts with two wins. His last race was on September 20, 2021.

This is Sadler’s fourth time competing in the Thoroughbred Makeover and her second time winning the Field Hunter Division. Also this year, Sadler placed third on Mike Mike in the Amateur Eventing division and was awarded the United States Pony Club Champion for the highest-placed Pony Club member. 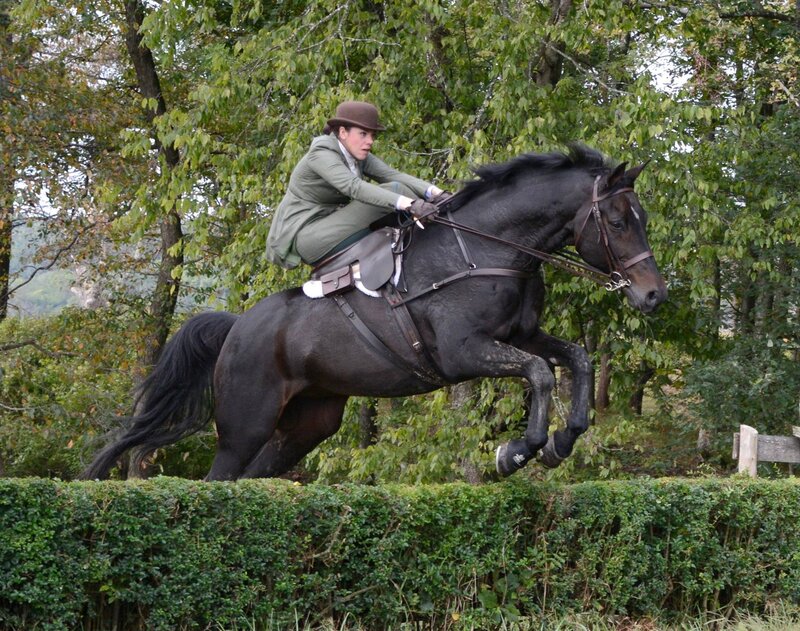 TAR Devon Zebrovious jump a hedge during the TARFHC. Photo by Liz Callar.

Formerly known as the North American Field Hunter Championships, the 38th annual Theodora A. Randolph Field Hunter Championships has a long format that covers a whole week to crown its eventual champion. The first four days consist of hunting with several Virginian hunts alongside the mounted judges, with ribbons given for each day.  The finalist competed on the fifth day at Glenwood Park in Middleburg, Virginia on October 8, 2022.

The event is named for Mrs. Theodora Ayer Randolph, who was Master of Piedmont Fox Hounds from 1954 - 1996 and Chairman of the Virginia Fall Races for many years. Due to Mrs. Randolph’s love of steeplechasers, the finals are always held in conjunction with the Virginia Fall Races, also held at Glenwood Park.

The first scheduled hunt with Middleburg Hunt had to be canceled due to Hurricane Ian crashing the party. While it was a soggy start, the competitors hunted during the week with Blue Ridge Hunt, Rappahannock Hunt, Piedmont Fox Hounds, and finally Loudoun Fairfax Hunt filling in at the last minute.

The overall champion was Mary Crane (Norfolk Hunt in Virginia) on Forever Bernardini, who also won the Top Thoroughbred award. Devon Zebrovious (Piedmont Fox Hounds) also competed in this event on Mapleleaf Celeste, bagging Best Turned Out Champion and fourth overall. Cameron Sadler (Moore County Hunt) missed going around a stump in the individual round, but despite going off course, she still won eighth overall on her horse Zapper. And her Moore County Hunt won the Hunt With The Most Competitors trophy. Sadler has competed and judged this competition many times and won it a few years ago with a Thoroughbred named Battalion. 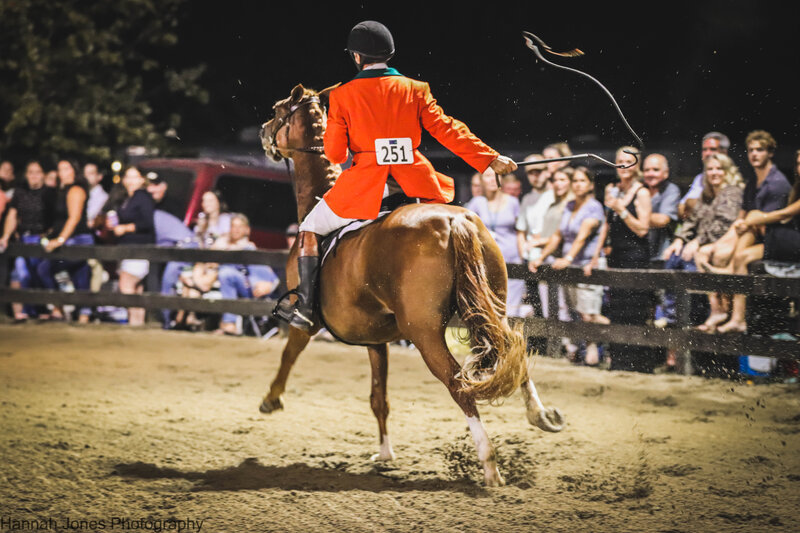 The popular Hunt Night at the annual Warrenton Horse show in Warrenton, Virginia, is always held on the Sunday before Labor Day. The venue is outdoor, which makes for a dramatic setting under the arena’s bright lights and the night sky. While there are several classes, the two favorites are the Staff Class and the Hunt Team Class. In the Staff Class, riders must jump a course as expected, but there are other elements they must perform to simulate the skills that staff must have in the hunt field. Cracking a whip at a hand gallop always brings a cheer from the crowd. The Hunt Team Class was a jumping course with three riders, mostly going single file and keeping a consistent distance and rhythm until the last fence, which they jump altogether.

This September 4, 2022, the Staff Class was won by Beth Woodson (Warrenton Hunt in Virginia) riding Finley (she would later place third at the Virginia Field Hunter Championships with Finley). The Hunt Team Class was won by a hunt team from Rappahannock Hunt, beating out a dozen other teams.

Joel Merle-Smith, MFH (Keswick Hunt) competed in several of the classes offered that night. While he didn’t get pinned in the Staff Class on his wife’s horse, Fortune Cookie, he did win the Gentlemen’s Hack on his family’s homebred, Hermione MS. Joel is starting his first season as a Joint Master with a bang.