Verdict of Guilt Is Reversed 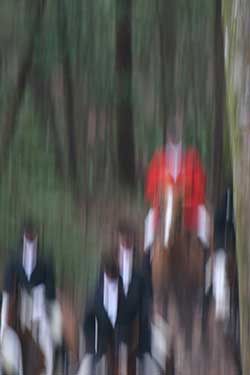 Last year, a senior UK foxhunter and board member of the British MFHA, Mark Hankinson, was found guilty in Westminster Magistrates' Court of contravening the despised Hunting Act of 2004. He was also ordered to pay the court £3,500 in fine and fee. The deputy chief Magistrate concluded that he was "clearly encouraging the mirage of trail laying to act as cover for old-fashioned illegal hunting."

The case involved the question of whether or not Hankinson, in a webinar seen by about one hundred hunt leaders, promoted ways for hunts to covertly hunt illegally by making it appear they were trail hunting.

This year, a court heard his appeal and considered whether Hankinson's words were intentionally encouraging an offense. The court decided to the contrary, reversed the original verdict, and Hankinson was adjudged not guilty.

Hankinson explained he was referring to the practice of laying dummy trails to fool saboteurs.

Appeals court Judge Gregory Perrins did acknowledge that “someone listening to his words might well have taken the view that he was encouraging illegal hunting.” But he also said, “We accept his role within the Hunting Office was to ensure compliance with the law, and the Hunting Office itself is committed to lawful hunting.... In those circumstances,” he added, “it would be unusual if they now took the decision to host a series of webinars which included advice on how to work around the ban.”

The evidence leading to a conviction in the original trial was video footage of the online discussion recorded by a hunt saboteur and leaked to the police and media. As a direct result of press coverage leading up to and during the trial, the members of Britain's National Trust, in a non-binding referendum, voted to ban trail hunting—also known as drag or scent hunting—on trust lands.

Andy Knott, chief executive of the League Against Cruel Sports (LACS ), crowed, "The trust must ban trail hunting on its land for good. Other landowners should take note and immediately follow suit."

The LACS had been actively driving the vote to ban with demonstrations against trail hunting. They and other anti-hunting activists pressured the National Trust board members to validate their members' vote with a binding decision. "The trust must ban trail hunting on its land for good. Trail hunting was suspended on Trust lands while the court case was underway.

Just weeks after the members' vote, the National Trust board members, in a binding decision, banned all trail hunting on trust land, a bitter and unfair defeat for British trail hunters. Yet now, even after the initial verdict's reversal, National Trust spokespersons have made it clear they have no intentions of even launching a review of their trail hunting ban.

Polly Portwin, the Countryside Alliance's director of the Campaign for Hunting, said there is "absolutely no mandate for prohibition of a legal activity which has been carried out on National Trust land for generations."

Tim Bonner, chief executive of the Countryside Alliance, told MailOnline "The National Trust made the original decision to ban legal trail hunting in the wake of Mark Hankinson's conviction which has now been overturned.

"It would be entirely unreasonable if the Trust were not to review that decision. The National Trust claims to be 'for everyone, forever' and so it must now show that it is for rural people too," Bonner said.

In this writer’s view, there is an aspect of this case that is outrageously unfair and insulting to the original donors of these lands. Surely, substantial parcels of these lands donated to the National Trust for the enjoyment of British citizens of all walks of life and circumstance were from large landowners with family heritages of foxhunting over the very lands they were giving up.

How ironic is this?