For several years Bob Ferrer, MFH, and Caroline Hunt members gave foxhunting demonstrations at Mount Vernon—another excellent venue for outreach that attracts visitors from around the country and the world.

One stop on Virginia’s Fredericksburg-area Historic Garden Week Tour this spring was at Chase’s End, the home and farm of Bob and Elizabeth Ferrer, Joint-MFHs of the Caroline Hunt. It’s quite a commitment to invite the world into your home and property, but the week-long tour has been a popular tradition in Virginia since 1927 when the Club decided to raise funds to save trees planted by Thomas Jefferson on the lawns of Monticello.

Today, funds raised during Garden Week are still used to restore and maintain Virginia’s historic gardens and to provide graduate level research fellowships. On Tuesday, April 30, 2019—the day scheduled for the tour at Chase’s End—the Ferrers hosted nearly 800 guests and staged a unique scene rarely experienced on Garden Club stops. Mounted Caroline Hunt members and staff rode out with foxhounds at 11:00 a.m. and 2:00 p.m. to demonstrate our sport to the uninitiated. What nicer way to introduce and promote foxhunting?

“We opened to two tour buses and about thirty cars at ten am, and it went strong to five pm,” said Bob. “The garden club did flowers in every room of the house, stables, and Munnings room...and screened porch off the Munnings room. They also set up cookies and refreshments at the garage.”

Caroline Hunt members in hunting attire were locate strategically to welcome visitors and answer questions. “We had people from across the U.S. and the state yesterday,” Bob said. “They loved the [foxhunting] demo. We had a narrator, and it came off well. Horribly hot for hunting kit, and hounds were happy for a dip in the pond after each demo! The former USAF Chief of Staff General John Jumper sought me out to say how much he enjoyed everything. Garden Club said it was a great success for them.” 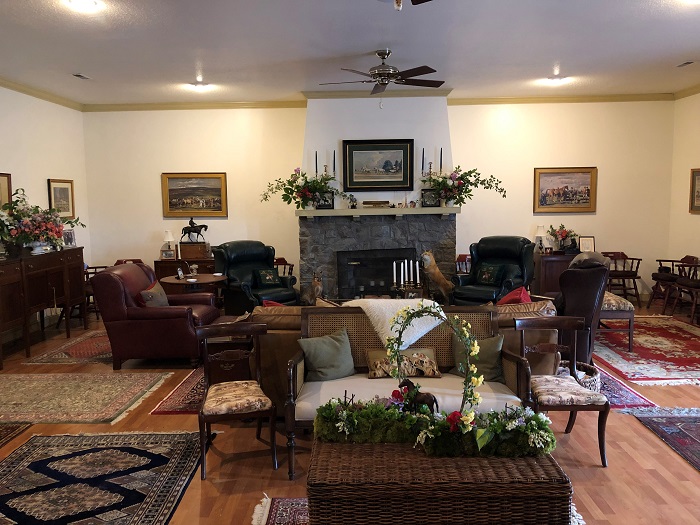 The Munnings room displays some of the Ferrers’ extensive collection of sporting art and serves as a comfortable gathering place after meets at Chase’s End.

The Ferrer home was built upon an old brick foundation discovered on the property. The acres of grass, miles of fencing, hunt stables, and kennels are on land which has been in Elizabeth’s (Gravatt) family for hundreds of years. The house is a “meticulous” reconstruction of what one of the original farmhouses might have looked like. The Munnings room, a particular favorite, is hung with work by its namesake and other sporting artists, and is comfortably furnished for hunt breakfasts and teas when hounds meet at Chase’s End.

Tour participants arrived at Ferrers’ via the Washington–Rochambeau Revolutionary Route in Spotsylvania and Caroline counties. This is the same historic path taken by the combined Continental Army troops of General George Washington and French troops of the Comte de Rochambeau en route to their victory at Yorktown and the surrender of the British army led by Gen. Charles Cornwallis.

The annual tours are well attended year after year, and each home to be visited possesses something of special interest that draws entire families to view, whether it be a historical house renovation, beautiful flower bed designs lush with spring blooms, or sites of special architectural interest. That the Ferrers have stepped up to support the historic gardens of Virginia and at the same time promote the beauty of our sport of foxhunting is a proactive outreach that, hopefully, may trigger ideas for other hunts during tours or outdoor festivals in other parts of the country.