April 1, 2020
“Hundreds of hurrying people pass within a few miles of Unionville, Pennsylvania, every day—unaware of the magical transformation that waits over a hill and down a road. The village guards the entrance to acres and acres of rolling grassland suspended between the suburbs of Wilmington and Philadelphia like a mirage."

“Immediately noticeable about this unexpected sweep of countryside is the luxury of miles of turf as closely woven and sturdy as homespun. And there is a wondrous absence of wire. No barbed wire, no hog wire, no flagged and electrified monofilament. The post-and-rail fences stretch on and on like railroad tracks. It’s the sort of landscape that strikes organ chords of rapture in a horseman’s soul: gallop-and-jump country, simply an outstanding foxhunting country. It has been painted by renowned artists George Weymouth and Andrew and Jamie Wyeth; filmed by Alfred Hitchcock (the hunt scenes in Marnie); been crash-landed on by Jacky Onassis and those not so famous. And for nearly fifty years, it has been nurtured by Nancy Penn Smith Hannum, the master of Mister Stewart’s Cheshire Foxhounds.”*

If there is a lasting legacy left by Nancy Hannum that can be seen, smelled, touched, and felt by sportsmen and women and lovers of open space, this is it. Mrs. Hannum not only took the horn from her stepfather W. Plunkett Stewart, MFH but took on the responsibility for preservation that he started as well. Revered yet controversial, her fixity of purpose was in her genes.

“Nancy Hannum was literally swaddled in the authority of belief. And like her famous grandfather, she had a real talent for believing. Matthew Josephson, author of The Robber Barons, wrote of Edward Henry Harriman [Wall Street baron, railroad magnate and founder of the Orange County Hunt] that when he got into a war, ‘he fought fully imbued with the notion that Destiny was on his side.’

“Others, admittedly, demeaned the family trait as a particularly virulent form of stubbornness, but some of the most insightful observers of Wall Street perceived it as deeper-rooted: an aptitude for conviction that made them formidable opponents.”

This congenital trait—this aptitude for conviction—was so deeply rooted in the Harriman family that the even the children could recite:

“In controversial moments
My perception’s very fine;
I always see both points of view,
The one that’s wrong and mine.”

Photos by Jim Graham, click a photo to start a slideshow: 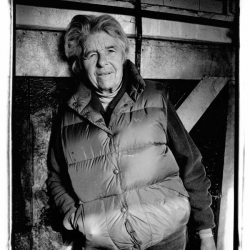 Mrs. Hannum served as Master of the Cheshire for over fifty years, and as huntsman for much of that time. Through those years she zealously guarded the open space of Chester County. She “advised” property owners how (and how not) to fence their land; she “convinced” them where to site their houses and improvements; she purchased countless properties and resold them at cost to sympathetic buyers; and she battled developers by every possible means from persuasion to bureaucratic delay. Moreover, she recruited the residents of her hunting community to follow her lead, and from her unrelenting crusade bloomed the famed Brandywine Conservancy, a national model for open space conservancy. Born of a bygone era, Nancy Hannum was one of the great heroines of North American foxhunting.

* All passages in quotation marks are excerpts from The Lady Blows a Horn by Nancy L. Mohr, Horse Country Press, 1997.