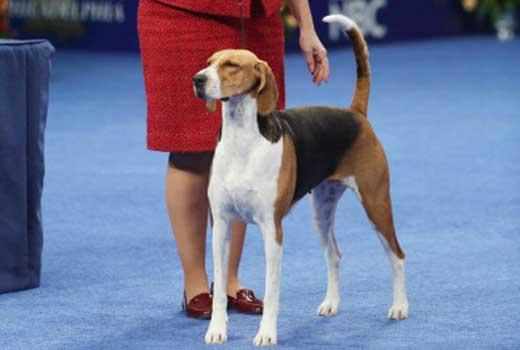 Jewel, the American foxhound barely edged out (according to knowledgeable observers) at Westminster by the affenpinscher last February, was judged Best in Show at the National Dog Show at the Greater Philadelphia Expo Center. More than 1,500 dogs were entered in the all-breed show.

The three-year-old female, GCH Kiarry’s Pandora’s Box (aka Jewel), is the first dog from the Hound Group to win Best in Show in the twelve-year history of the National. She is the winningest AKC-Registered American foxhound in the history of the breed. Her grandfather was the previous record holder.

While it’s often scary to see what AKC shows have done to some breeds, I have to admit that Jewel would look pretty nice in any pack of hounds I know. A caveat: some judges in the foxhunting world would take issue with her stern, which curves over her back.

Jewel is a lovely mover as can be seen in a video of the seven champions of the various dog groups selected for the final judging.

“I never have seen one that good [as Jewel] and may never see one better,” said Judge Randy E. Garren.

Jewel is owned and handled by her breeder, Lisa Miller of Mechanicsville, Maryland. “Jewel flies around on a loose lead, then she stops and free stacks with a look that says, ‘Beat me.’ She is probably the best American Foxhound I’ve ever bred,” Miller said.

# Gertie Pumphrey 2013-12-10 12:55
Wonder if I am the only one who found calling The Kennel Club of Philadelphia dog show "the National Dog Show" confusing, even tho they do call it that themselves? Thought they were referring to Eukanuba or Westminster, but not.
Reply
# Martha Wolfe 2013-12-18 14:35
Wouldn't Harry Worcester Smith be proud?
Reply
Refresh comments list
RSS feed for comments to this post