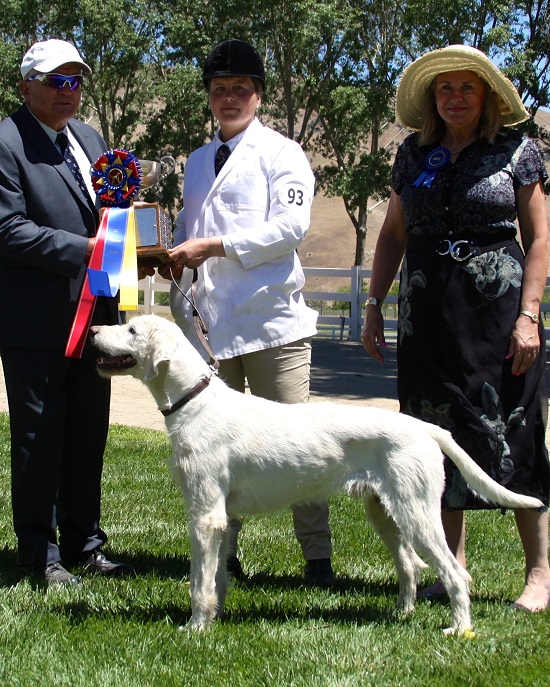 Vixen Evens the Score with Valor: Is Grand Champion at Central States Last year was the boys’ year. This year the Crossbred female, Fort Leavenworth Vixen 2013, evened the score with her littermate Valor by winning the Grand Championship at the Central States Hound Show.

Vixen is a speckled, mostly white tricolor by Brazos Valley Baxter ‘08 out of Fort Leavenworth Piper ‘07. American and Crossbred bloodlines are predominantly from Fort Leavenworth Hunt (KS), Brazos Valley Hounds (TX), and the Piedmont Fox Hounds (VA). The most recent contribution of pure English blood to this lovely Crossbred was from the Arapahoe Hunt kennels (CO), three generations back. The authorPicture this: four hunts—Bridlespur Hunt (MO), Full Cry Hounds (AL), Grand Canyon Hounds (AZ),and Mill Creek Hunt (IL)—bringing their best three couple of hounds to the field; thirty-five enthusiastic mounted riders; and sweeping vistas of open hunting country loaded with coyotes. This made for an action-packed five days of foxhunting activities consisting of a three-day Foxhound Performance Trial, foot hunting with the bassets, and a joint meet of foxhounds. It all took place at the  Flint Hills Invitational Performance Trial, held on March 7-9, 2012, generously hosted by the Moingona Hunt staff and members. The Flint Hills area of Kansas is an immense rolling prairie of tallgrass and recognized as one of America’s unique treasures. 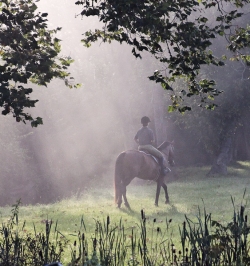 Cubhunting is now underway in most hunting countries, and the early morning slanting light is a photographer’s wish come true. Some stunning photos are coming our way, and we will be sharing them with you. For a sample of Karen Myers’ photographic art on opening day of the Blue Ridge cubhunting season, click on Photo Gallery, under the Horse and Hound drop-down menu. Watch here for Old Dominion, Mill Creek, and other photo slide shows to follow.

Photographers, we invite you to submit 12–18 of your best shots in your hunting countries, include captions, and we will post them in our Gallery as slide shows with credit to you and links back to your email or website so others may find you.
September 8, 2010