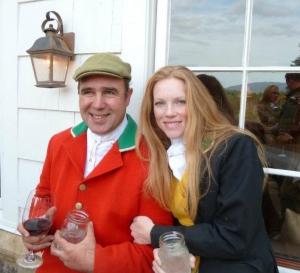 Huntsman Andy Bozdan and wife Erin are moving from Tennessee to Virginia.In a fast game of musical chairs, huntsmen around the country are moving at a rapid pace. Andy Bozdan, Ryan Johnsey, Daron Beeney, Matthew Cook, Gerald Keal, and Ross Salter are all in the game.

Two years ago London-born Andy Bozdan arrived here from Australia to hunt hounds for the Tennessee Valley Hunt (TN). Bozdan is now moving to the Loudoun West Hunt (VA) to take over their pack of Old English and Crossbred hounds for the 2013/2014 season.

“I have loved every minute of hunting the Tennessee Valley Penn-Marydels,” Bozdan said, “and moving to Tennessee from the UK allowed me the opportunity to meet Erin, whom I married in May last year.

“Hounds have really come together this season, making a real pack. All the new entry have entered well and hunted well all season with no exceptions. The pack is in good shape both physically and mentally, very happy with life, and I know they will miss their dad as I will miss them very much too. We are sad to be leaving Tennessee, but realize what a wonderful opportunity awaits us in Virginia this coming May.”

Bozdan’s opening at Tennessee Valley will be filled by Ryan Johnsey, current huntsman for the Loudoun Hunt (VA)—not to be confused with Bozdan’s Loudoun West! The Loudoun Hunt is currently seeking a huntsman.

Bill McDevitt, honorary whipper-in and benefactor of the Los Altos
Hounds (CA) since 1963, passed away at his waterfront Sausalito home over
the weekend.

He will be remembered by his many hunt buddies and the numerous
Masters he served, including Tom Harris, W.W. Mein, Richard Collins,
Eugene Rettig, Mrs. Jay Foss, and Albert Schreck. He served as Vice
President from 1981 until 1985 and maintained his membership until 2000.

He and his great friend Niels Schultz, Los Altos member for many years, were
great benefactors of the hunt in the early years, often meeting with
landowners and hosting hunt breakfasts, not only in Marin County but
also in San Benito County, and providing needed funds, labor, and
vehicles for the hunt, his friends recall.

Bill and his son "Willie" often rode as a pair in the Los Altos Hunt Pebble Beach
Race Meet. Bill also rode jumpers and played polo. He was the
honored guest at the 1993 Hunt Ball held at the Monterey Bay Aquarium.

He was owner and founder of McDevitt and Sons construction company in
Marin County and is survived by an extended family. Funeral
arrangements were private, but a party for his friends is planned in
mid-September, to be announced later. 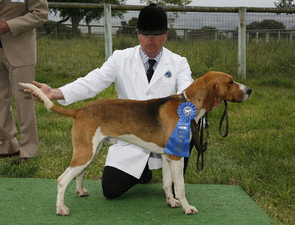 “It’s not often an un-entered hound can beat an entered hound—fully developed and muscled—but Nicassio moved really well,” recalled huntsman Matthew Cook, who is in his sixth season at Los Altos. “That’s what sold it!”

Nicassio is by Ninja 2006, an un-registered dog hound that Cook obtained from his friend Martyn Blackmore, huntsman at the Loudoun West Hunt (VA). Blackmore? Again? This is the second grand champion hound this season in whose story Martyn Blackmore played a prominent role! 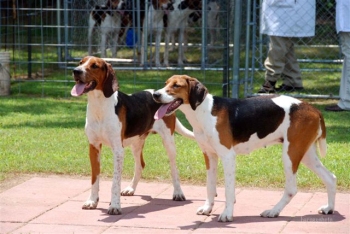 The annual Farmington Hunt Puppy Show was held at noon on Sunday, the first of many hot days of summer 2010, June 20th at the kennels. Pimm's Cup and other cool refreshments were served ringside by Forbes and Sherry Reback, and a post-show luncheon was served at the clubhouse by former club president B.J. Korol, with help from Kay Barquin, Shelly Thompson, and secretary and social co-chair Pattie Boden.

The hunt staff, Daron and Alison Beeney and kennelman Tom McCauley made sure the grounds were in beautiful shape for the event that welcomed a good crowd of members, visitors from out of town, and the Free Union neighborhood. Guest judges were Mrs. Phelps S. Hunter, ex-MFH of Los Altos Hounds (CA), and Martyn Blackmore, huntsman for the Loudoun West Hunt.