Passing It On: The Children's Hunt at Woodford Hounds 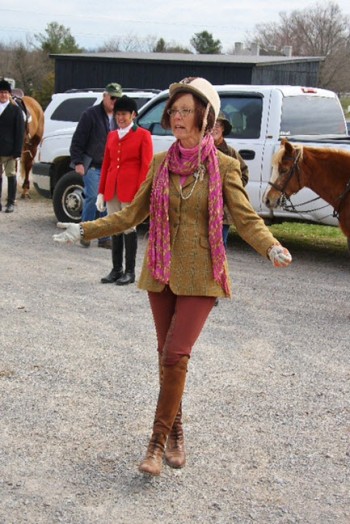 What's wrong with this picture? asks Mary Pierson at the Children's Hunt to test the youngsters' knowledge of proper hunting attire. Master Jane Winegardner (scarlet coat) observes with amusement.   / Sive Doyle photoTake a look around your hunt field. If your youngest members are the cute couple in their thirties, foxhunting is in trouble. Unless we share our passion with youngsters, foxhunting will die out when we do.

It doesn’t take a lot of effort to set the stage for a Children’s Hunt, and you’ll be well-rewarded when you see all the smiles at the end of the day. Michelle Primm was the force behind Woodford’s Children’s Hunt on March 23, 2013. She held well-attended foxhunting camps the past two summers to introduce children to the basics of foxhunting, and a trailer-load of suitable ponies arrived at several meets during the season to take her students out for a day of sport. Wanting to get more kids together at the same time, “Aunt Primm” approached Woodford Masters Robbie Lyons, Jane Winegardner, and Jim FitzGerald with plans for the Children’s Hunt. Woodford Huntsman Glen Westmoreland was all in favor with just one caveat: no lectures!

# Denya Massey 2013-04-06 16:23
Well done, Woodford Hounds, complete with a photographic record of all the kids!
Reply
Refresh comments list
RSS feed for comments to this post