Orange County Kermit 2015, after three consecutive appearances in the Grand Championship Class at the Bryn Mawr Hound Show over the last three years, proved that persistence pays off. The show was held Saturday, June 2, 2018 on the spacious grounds of the Radnor Hunt in Malvern, Pennsylvania, and Judge C. Martin Wood declared Kermit to be the “best example of an American Foxhound that he had ever seen.” And Mr. Wood has seen a few. Jim and Judy Cox, a Warwick, Pennsylvania couple who live in the vicinity of Dark Hollow Park, are once again campaigning to ban foxhunting in the park. Four years ago the couple sued the Huntingdon Valley Hunt and huntsman Richard Harris, MFH, claiming that hounds knocked Judy Cox down while walking her dog and bit them both.

Foxhunting in the park was suspended briefly, then allowed to continue. The Coxes (Jim is a township supervisor) now claim that the hunt has not conformed to the terms of the 2012 agreement.

Supervisors Chairwoman Judith Algeo agrees with the Coxes, voicing her “concerns that the continuance of these fox hunts are a safety risk to the residents.” Town Manager Gail Weniger says the township is no longer “quite as rural as it used to be.”

The hunt has scheduled ten hunts in the 770-acre park and claims it has followed the rules.

Foxhunting permits are issued by the county Parks and Recreation Department. For more details, click for Justine McDaniel’s story in the Pittsburgh Post Gazette.

A lawsuit has been filed in Buck’s County against the Huntingdon Valley Hunt and Richard Harris, MFH by a Warwick, Pennsylvania couple. John and Judy Cox claim they were attacked on January 1 while walking their blind dog in Dark Hollow Park.

Hounds were hunting in the park at the time and came in contact with the plaintiffs. The woman was knocked down and claims that hounds bit her and her dog. The lawsuit charges the hunt with “reckless indifference to the rights of the Plaintiffs and others.” Harris was cited for “failure to control the dogs.”

In the wake of the incident, the township briefly curtailed foxhunting in the park, but has since allowed hunting to continue there. 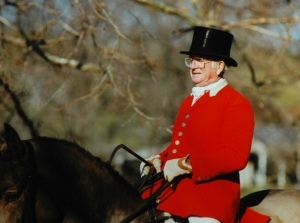 Clifford Hunt, a genuine old horseman and a passionate foxhunter, passed away on December 2, 2010 at age eighty-four. I can’t begin to tally the number of individuals whose lives this man changed. He was a teacher who created many dedicated foxhunters. He was a hosteller, and, with his wife and partner Laura, he provided visiting foxhunters with bed, meals, hirelings, and transport at his well-known Hunting Box in Boyce, Virginia for twenty-six years (1978–2004). Sportsmen came to The Hunting Box from Canada and all the northern states to experience foxhunting in Virginia. Many loved it so much they moved here.