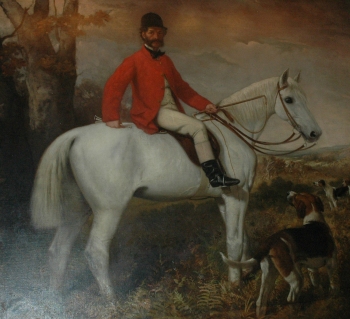 The intersection of people and places is sometimes wondrously coincidental. Irish photojournalist Noel Mullins and I have recently discovered foxhunting friends we have in common from County Galway some forty years since. More than friends, these were larger-than-life individuals enormously influential in the process that turned each of us into the foxhunting men we became.

Fast forward, and here is an excerpt from Chapter 2 of my book, Foxhunting Adventures: Chasing the Story, describing a large painting hanging in the dining room in Bermingham House, County Galway, home of the late Lady Molly Cusack-Smith, MFH:

"Dominating the end wall above the sideboard and presiding in spirit equal to Molly’s presence, gray-whiskered John Denis surveys all from the saddle. This dramatic nineteenth-century portrait of man, horse, and hound in a graceful swirl of motion and muscle was presented to him by grateful members of the Galway field."

I used to possess a photographic slide of that portrait of John Denis, and I desperately wanted to include that image in my book. I combed the house for it but couldn’t find it, so, sadly, we went to press without it.

Mullins knew Molly and Bermingham House intimately and, after reading that story in my book, coincidentally sent me the photo of the very painting I had wanted. Too late for the book, but not to late to publish here!

John Denis was one of Ireland’s legendary horsemen. A nineteenth century direct ancestor of Lady Molly, Denis was the first Master and huntsman of the Galway Blazers. Tales of his skill with foxhounds and daring over steeplechase hurdles and hunt race fences are still recounted with awe throughout the pubs and parlors of County Galway.

The story is told of Denis in his later years: When competitors’ complaints reached him concerning an impossible course of obstacles he had designed for a hunt race, he reacted characteristically. Pulling his horse from the field, he leaped aboard and galloped over the entire course—without saddle or bridle.

+1 # nina schug 2010-08-08 05:58
what a wonderful story!
Reply
+1 # nancy joyce 2010-08-08 16:27
I remember this pic in Molly's dining room over the buffet at Bermingham House sometime in the mid -1970's. Sitting regally at the head of the table she had within her reach a lovely Waterford Crystal water pitcher filled to the brim which she poured from into her own glass at regular intervals all throughout our longish meal.
I learned later that the pitcher was filled with gin.
Reply
Refresh comments list
RSS feed for comments to this post