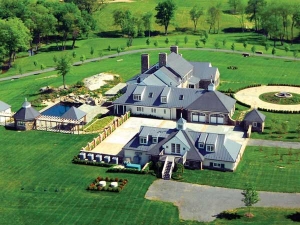 Poplar Grange is the happy outcome of a potential problem: loss of hunting country to the Piedmont Fox Hounds and unwanted development next to Zohar Ben-Dov’s Kinross Farm.

In 2007 Ben-Dov learned belatedly that more than a hundred acres to his north had been sold almost as it came on the market, and, most worrisome, to a developer.

When it became evident that a subdivision would be permitted, Ben-Dov made a tempting offer to the developer to abandon the plans to cut up this prime, ancient hunting country. His offer was accepted, the developer took a hike, and all of Piedmont hunt breathed a grateful sigh.

The question was then how to make the property repay its debt. Initially, Ben-Dov anticipated he and his family would build something for themselves, so he designed and built a stunning house and stables that would replicate a centuries old equestrian property. Attention to detail and quality was paramount. When the family ultimately decided to stay at Kinross, the goal then shifted to attract a like-minded family who would have similar and complementary equestrian and rural interests.

“Poplar Grange” is cleverly layered: the hilly, winding, tree-lined drive approaches from the west and winds up over a stone bridge and around the house to the circular stone forecourt. The house is elegantly framed by rolling hills behind it, and the family side of the house is partially screened from the lane by a huge stone outcropping which shelters the pool and waterfall. The stable lane departs from the main drive well before the house, ensuring greater privacy by keeping much of the traffic at a distance.

The 12,000 square-foot house at Poplar Grange boasts some elements that were reclaimed from historic homes. The design, complete with the enclosed parking courtyard, demonstrates an architectural conceit described as parts on parts, giving the impression of a much older original house to which wings, or parts, were added as needed in somewhat irregular sizes and materials. Other structures include a stunning stable, carriage house, and outbuildings, where the meeting of function and design is completely fluid.

Indicative of the attention given to the details throughout the property are the standing water pumps all along the drive, a trellis and gazebo to the side of the pool, fountains to soothe the soul, materials that lend weight and substance, an elevator in the house, more than 250 maple trees, stone bridges by the pond, an island cabinet in the dressing room, and generous windows, all complemented by sweeping sight lines. Thoughtful details such as these appear throughout Poplar Grange, making it as welcoming from the first drive into the forecourt as it is elegant in its design and affinity to the vernacular of northern Virginia’s historic equestrian heritage.