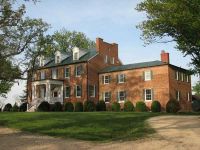 Not often does a property come on the market that features stunning views, historic references, original detailing, famous residents, three houses, a traditional fixture each hunting season, and a commanding presence in the community. Such a property is Woodley, a remarkable 383-acre working farm situated in the heart of the Blue Ridge Hunt country, positioned high on a ridge offering exceptional views of the Blue Ridge and Massanutten Mountains, and its own point-to-point course.

From fancy dinner parties to weekend visitors (or longer!) to hunt breakfasts with riders in boots, Woodley trumps any other venue for entertaining: our family had three wedding receptions at Woodley; my mother’s steak tartare and biscuits were the highlights of her hunt breakfast menu from 1974 to 1990; and my step-father’s eightieth black tie dinner party was a dazzling affair. We can only imagine horse-drawn coaches pulling up to the wide, generous front portico and depositing ladies and gentlemen in their finest, as early as the1830s, or fellow hunters with hounds, whiskey and rifles.

A little history: in the 1830s, Daniel Sowers bought the land from George Washington’s cousin, and built the magnificent main house of pink Flemish bond work. As was typical of early houses built without benefit of architects, Woodley was likely designed by its owner, who would have seen houses or drawings he admired, in conjunction with the local carpenters who would have borrowed from their own building experience or followed one of the "pattern books" of Benjamin Asher, an American architect whose books were published in the early 1800s and provided all the details needed to build a fine house, complete with interior carpentry details.

Woodley is a superb example of a Georgian house, with some Federal conceits. In Woodley, the exterior and symmetrical interior with a wide center hall through the width of the house was Georgian in design, while many details were Federal, including its fanlights, side lights and dentil moldings at the front porch, the elegantly restrained window casings, and an arch detail carved into the third story dormer gables. Fortunately, little was done to tamper with the original main house, and its shape was altered only by a substantial, sympathetic addition to the south.

The wing was quite likely built during the Civil War because its brick facade changes from a darker brick to a slightly paler brick at mid-window height of the second floor. The Civil War would have made it impossible to get bricks, and the later shipment was not of the original fabrication, or the war simply brought construction itself to a standstill as battles raged constantly across Northern Virginia. It was in this wing that author and editor Alexander Mackay-Smith had his study, where he wrote “Foxhunting in North America,” and other works.

But all this history obscures what a wonderful house it is to live in. Its rooms are bright, generous, well-balanced, with easy access to all parts of the house. In the past decade, Woodley has undergone a sensitive restoration and upgrade to modern conveniences, as well as upgrading the well, construction of a new driveway through the woods, extensive landscaping, rejuvenating the ancient boxwood allée which stands twelve feet tall, and incorporating a cleverly constructed stone terrace wall to embrace two sides of the lap pool, minimizing its modern appearance.

For all its grandeur, Woodley is an eminently functional farm. It features two generous secondary houses for staff or family. The eight stall stable was designed by the Mackay-Smiths to accommodate the hustle of a foxhunting morning, or the hectic departure for an event. Paddocks, riding ring, and plenty of open space mean it’s self-contained – no need to leave the property for a super ride. The huge bank barn is a landmark.

However, in the manner of rural properties, it’s the back door that invites one to come on in. An office is tucked into the southeast corner of the wing, overlooking the best of Woodley—the mountain vistas, the bank barn, the road to the stable, and incoming visitors and family --- perfectly positioned to survey one’s domain. And what a domain.