It’s that time of the off-season to check up on huntsmen who are moving or retiring and those hunts acquiring or seeking huntsmen. Here’s what we know. Live Oak Hounds (FL)
British-born Guy Allman has returned to the States from England to hunt the well-bred pack of Modern English and Crossbred foxhounds at Live Oak in north Florida. Allman has been in hunt service for thirty-seven seasons, all but three years of that time in England.

It’s that time of the off-season to check up on huntsmen who are moving or retiring and those hunts acquiring or seeking huntsmen. Here’s what we know.

Live Oak Hounds (FL)
British-born Guy Allman has returned to the States from England to hunt the well-bred pack of Modern English and Crossbred foxhounds at Live Oak in north Florida. Allman has been in hunt service for thirty-seven seasons, all but three years of that time in England.

Rising through the rigorous British system of hunt service, he served as whipper-in or kennel huntsman at the Portman, Chiddingfold Leaconfiel and Cowdray, Golden Vale, North Cotswold, and Heythrop. Through the last twenty-two seasons, he carried the horn at the Mid-Devon (UK), the Blue Ridge Hunt (VA), and back to England as huntsman for the Bicester, a top-flight pack hunting a four-day-a-week country in the English Shires.

Having known Allman during his earlier stint at the Blue Ridge, I know that his pack will be superbly conditioned, fit, biddable, and possessing of a strong work ethic. The more difficult the day, the harder he’ll expect his hounds to work. Allman doesn’t believe in excuses, and his hounds will learn they must first work hard and try their best before expecting help from him.

The Live Oak field can expect to see plenty of hounds at work; Allman likes to hunt a large pack―typically twenty-five to thirty couple, virtually every hound in kennels capable of walking on four legs.

“Our expectations are that we will have superlative sport,” said Daphne Wood, MFH, Live Oak Hounds. “Reports from both sides of the Atlantic say that Guy is quite capable and tremendous fun to hunt with. The Masters and subscribers are looking forward to a golden era at Live Oak!”

Arriving with Allman on July fifth was Zara Brooks, who will turn hounds to him and help train, exercise, and hunt the twenty off-the-track-Thoroughbreds that serve as staff horses at Live Oak. Zara’s mother is a Master at the Thurlow (UK) in Suffolk, where the family maintains a business breaking and training Thoroughbreds for the race track and hunting field.

After fifty-seven seasons in hunt service at hunting institutions considered amongst the cream of British hunts, Allman must have learned something useful! Here’s a sensible bit of advice for any huntsman or hunt staff member that I recall Allman insisting upon from his staff: simplified and uniform language to be used by all who address or command hounds.

This may not apply to Live Oak, but in some hunting fields, one often hears different commands from different staff members, all seeking the same response from hounds. Allman will insist that all staff members use the same brief, specific hound commands. Surely, that has to be less stressful for hounds and elicit faster responses.

Former Live Oak huntsman Sam Adams, now in Atlanta, is investigating career opportunities in sales and viewing his love for hunting in a new light―just for fun. 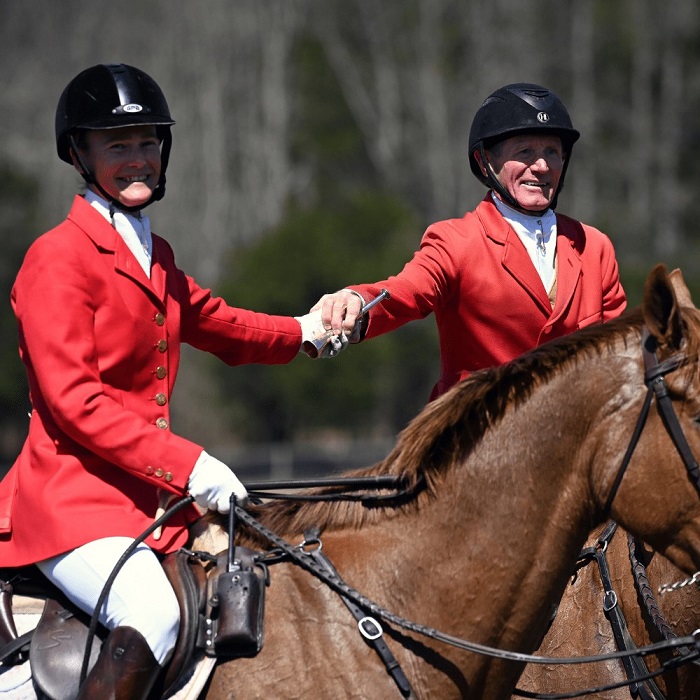 Hillsboro Hounds (TN)
After forty-two years as huntsman of the Hillsboro Hounds, Johnnie Gray has passed the horn to his wife Leilani, former first whipper-in―all with the blessing of the Hillsboro Masters. The announcement and brief ceremony were made and conducted by Johnnie in late March, back at the trailers after the last hunt of the season.

Several years ago, on top of other old racing injuries, when Johnnie had rotator cuff surgery, Leilani hunted hounds until he recovered. In reality, the couple has alternated as huntsman and whipper-in, back and forth, even during the course of a hunt, for several years. The very nature of the Hillsboro hunting country, divided as it is by ridges, makes it sensible for hounds to be led by one or another familiar individual, depending on which ridge the quarry has chosen to climb and cross and whether or not the huntsman can get over promptly. Leilani has been whipping-in to Johnnie for about twenty years, and the two have learned how to work together in that country for the best results. They are said to have worked out a shorthand communication on the radio, and, by now, their support to each other during a day’s hunting has become second nature. See Covertside writer Josh Walker's excellent article on Leilani and Johnnie.

Over the last few years, Hillsboro has established a position of prominence at the hound shows through their breeding program, as we have so often described in Foxhunting Life. The Hillsboro are consistently winning Championships at the hound shows with elegant hounds that also hunt well in the field. Johnnie has traded bloodlines back and forth with Tony Leahy, MFH and huntsman of the Fox River Valley Hounds (IL), for several years now, a successful and fruitful partnership in carrying on highly prepotent Modern English bloodlines.

After forty-two seasons, Johnnie Gray still has much to contribute to the hunt where he has spent most of his career and to Leilani, the new huntsman he has developed to carry on seamlessly. Success stories like this of continuity and long staff careers are born of strong Masterships of like-minded individuals with a love of the sport and a unified commitment to its health and well-being as part of the larger community. Hillsboro has long enjoyed such leadership. Mooreland Hunt (AL)
Glen Westmoreland is the new huntsman at the Mooreland Hunt (AL). The Mooreland was organized in 1961 by Harry Moore Rhett, Jr, MFH, and since that date, there have always been one or more members of the Moore-Rhett Family in the Mastership. Harry Rett’s daughter Leslie Rhett Crosby, MFH, is the current president of the Masters of Foxhounds Association of North America.

Westmoreland moved to Canada to hunt hounds for several seasons at the London Hunt (ON), receiving high marks from the Masters. When he returned to the States, that hunt was disbanded. Most recently, he has been serving as a professional whipper-in for Fox River Valley/Massbach and the Midland Fox Hounds.

Former Mooreland huntsman Rhodri Jones-Evans has moved to Camargo Hunt (OH) to take over as huntsman upon the departure and retirement of former professional huntsman Andy Bozdan and his wife Erin, professional whipper-in. London-born Bozdan, who began his career as a second horseman in England, has hunted hounds on three continents―England, Australia, and North America.

Mr. Stewart’s Cheshire Foxhounds (PA)
With the departure of huntsman Ivan Dowling, the Cheshire has enlisted professional whipper-in Mackenzie Wertman to carry the horn for the coming season. In the meantime, a committee will conduct a search for a new huntsman on a permanent basis. The Cheshire would seem to be an outstanding opportunity for an experienced huntsman to provide sport for a venerable American hunt in a well-managed hunting country with a keen and knowledgeable field of sporting men and women, many of whom were/are prominent jump race riders and trainers.

There may well be changes and moves across North America as yet unknown to us. Please let us know. 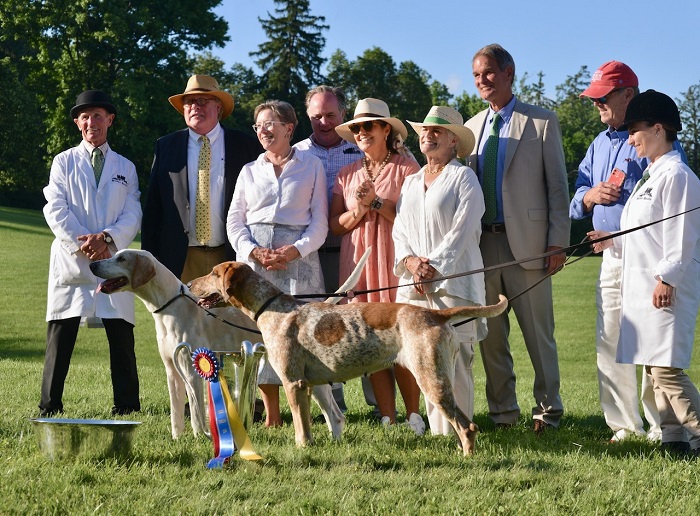 After having had to cancel the show for the last two consecutive years due to Covid, the Virginia Foxhound Show was held at Morven Park in Leesburg, Virginia on Sunday, May 29, 2022. It was a grand reunion for the many hunting people from across the country who participated, and the weather was fittingly gorgeous all weekend.

Hounds from thirty-four hunts competed at Virginia, but we’re not completely whole yet. We miss our foxhunting friends in Canada and hope that next year will see us together again.

The first foxhound show in North America in three years, and Hillsboro Wagtail ’20 has good reason to wag her tail...er...stern! 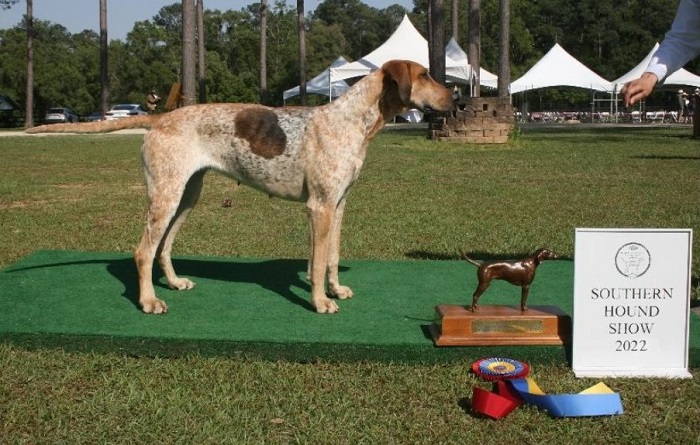 The mood was particularly festive as this was the first hound show in three years to be held in North America thanks to the Corona Virus. Sadly, Midland Fox Hounds (GA) had kennel cough and was unable to bring hounds, but eight packs showed hounds: Belle Meade Hunt (GA), Fox River Valley Hunt (IL), Goodwin Hounds (NC), Hillsboro Hounds (TN), Iroquois Hunt (KY), Live Oak Hounds (FL), Mooreland Hunt (AL), and Palm Beach Hounds (FL). Hounds competed under blue skies, but with chilly temperatures in the forties and low fifties and relentless high wind that made the seated lunch for over 150 people look like a food fight, with fried chicken, plates, napkins, and utensils flying through the air, all as the tent was trying to collapse! 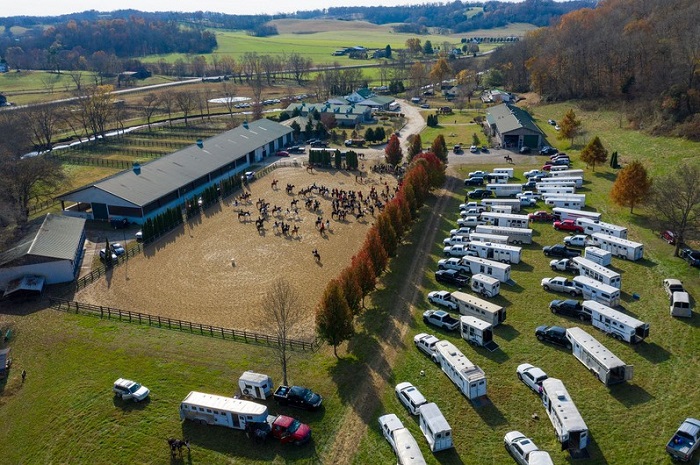 The history of the Mells Fox Hounds (TN) goes back to a universally known nursery rhyme—“Little Jack Horner.”

Really. Stay with me. This innocent-sounding rhyming couplet is believed to be based upon a sixteenth-century real estate swindle at the highest levels of church and government in jolly old England.*

When “Little Jack Horner sat in a corner eating his Christmas pie, he stuck in his thumb and pulled out a plum.” Jack’s plum was metaphor for a far dearer prize.