Two Families with Five Generations in the Genesee Valley Field

The Chanler family of Geneseo is the second to attain this venerable state with the introduction of nine-year-old Mary Chanler to the hunting field this season. According to Sally Fox’s article in the Livingston Daily News, Mary is the daughter of Andrew and Alison Chanler. Mary's family has been hunting with Genesee Valley back to great-great-grandfather Winthrop Chanler, MFH in the 1920s.

I’ve been asking to hunt for years, said Mary!

Ed Young—newly appointed to the five-member FEI (international) Driving Technical Committee—was plucked from the Genesee Valley hunting field in the mid-1970s by Bill Remley, founder of the Walnut Hill Carriage Driving Competition in New York State. Remley recognized Young’s math, organizational, and leadership skills and asked him to help out with the scoring in an upcoming competition.

That small job, and others that followed, fired a growing enthusiasm in Young for driving. As he became more involved in the sport of driving, many encouraged him to become licensed as a Technical Delegate. He became so highly regarded that he recently left for Germany as chef d’equipe of the U.S. team and last January joined a Hungarian, a Belgian, a German, and an Australian on the FEI Technical Committee.

Until his retirement Young, was a math teacher in the public school system for thirty-eight years, where he developed alternative math programs. He first came to the Genesee Valley area with an interest in hunters and jumpers, and soon joined the Genesee Valley Hunt. 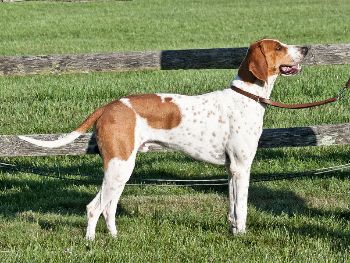 Ignored in Virginia and over-shadowed by his littermate, Teapot—judged best Unentered Hound at Virginia—Templeton went to Bryn Mawr determined to redeem himself.

Was This a Good Season, or What? 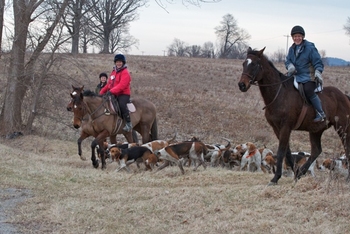 Genesee Valley hounds going home from their one hundredth hunt of the season after running their fox in and out of a swamp for nearly two hours. (l-r) whipper-in Erica Hutten, Master and huntsman Marion Thorne, and whipper-in and hunt secretary Janice Barrett. / Bill Gamble photoThe Genesee Valley Hunt (NY) celebrated a new record for their hunt on Wednesday, February 8, 2012, when they completed their one hundredth hunt of the season. True, the eastern part of the country has been blessed with an easy winter, but equally true is that their hunting country sits astride the same latitude as Buffalo, New York!

Located in a northern clime, the Genesee Valley Hunt decided long ago to simply ignore the weather. The only generally acceptable causes for cancellation are lightning—you never want to be sitting on a horse shod with steel shoes in a lightning storm—or when the Genesee River freezes over. Of course, the hunt’s geographic location is advantageous in the summer where they are able to start cubhunting in mid-July.