William Dunlap: The Walker Foxhound as an Allegory William Dunlap is an important contemporary artist of the South with a powerful affinity for southern landscapes and Walker foxhounds. Dunlap’s work may be seen in many prestigious collections, including the Metropolitan Museum of Art and the Corcoran Collection of the National Gallery of Art.

His book, Dunlap, features more than one hundred works, produced over a thirty-year period. It is published in a trade hardback and a limited edition of two hundred signed, bound-in-linen covers, housed in a matching linen-covered clamshell box. A signed, numbered print featuring four Walker foxhounds is included in the box. The book's cover features a surrealist landscape with a white Walker foxhound, Delta Dog Trot, appearing ready to climb right out of the painting, a nod to nineteenth century trompe l’oeil techniques. The painting, “Delta Dog Trot, Landscape Askew” hangs at the Alluvian Hotel in Greenwood, Mississippi.

Dunlap’s grandfather was “a foxhunter of the old school,” Dunlap writes. “He bred and hunted generations of pure blood Walker Hounds. With names like Lucky, Mary, Speck, Sally and Bo, these dogs were all legs, lungs, nose and heart. They lived to run, but spent most of their lives laying around the kennel, eating, sleeping, stretching and occasionally giving off the deep-throated mouth that would send any fox in earshot scurrying for the nearest hole.

“The hounds would perk up their ears late of an afternoon when a pickup or two with dogs in the back pulled into the lot. The men would stand around, talk, chew tobacco, and then about dark, load up the dogs—who by now were in a high state of agitation—and off they’d drive. There was sure enough about to be a fox race.

“The men would release the hounds at some pre-ordained spot and then ride the ridge roads all night listening for the telltale sound of the lead dog opening on a fox. The race was on, not to be watched, but rather followed by ear. From this high-pitched cacophony of the ‘dogs’ mouth,’ the men could identify whose hound was ahead, whether they had struck a gray or a red, and whose farm they were tearing up. ‘The race’ was one man’s dog against the others, the fox almost peripheral to the real contest at hand.

“By dawn, with the prey gone to ground and hounds quiet, the men would blow their truck horns and shout their dogs’ names. My grandfather’s pack came to the call of an old hunting horn that had been his father’s. The foxhounds would come straggling in, exhausted, tongues hanging out, limping and bleeding from barbed wire cuts.

“Not all would be accounted for. I once rode around for several days with my grandfather looking for a favored dog, still missing. I’d never seen a grown man so distraught. A friend pulled up beside him and the conversation went something like,

“‘Back at the Osborne place. Laying up on the porch.’

“My grandfather narrowed his eyes and in a steely voice said, ‘No dog of mine would ever lay on somebody’s porch.’ 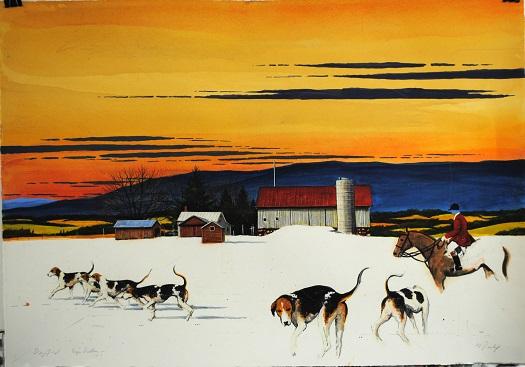 Dunlap’s artwork includes wide-scale traditional landscapes, traditional imagery mixed with surrealist surprises, and mixed media constructions. Speaking directly to Foxhunting Life readers about his art, and especially about the examples in this article, Dunlap writes, “Walker Hounds for me are very powerful symbols, and all animals are generally stand-ins for an often missing human presence. The scarlet jacketed riders in these works are an exception.

“I am of course very much aware of the grand school of English hunting scenes, and did so enjoy the Munnings exhibition in Middleburg last season. What I do is not to emulate but somehow build on, counter, to make contemporary that remarkable body of work with which we are all so familiar. 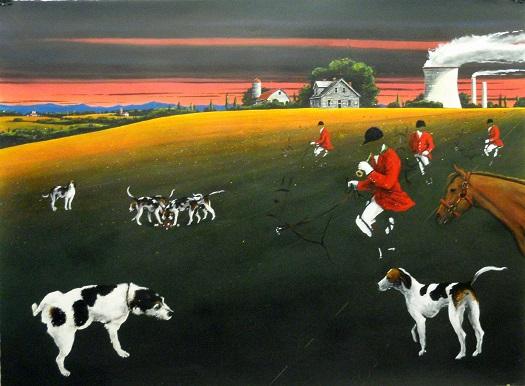 “The painting “Horse Drawn–House Place” is one of a series of Ridge Run paintings, in which the high horizon line generally supports a dwelling, with some reference to industrialization in the background, and a mess of dogs and horses and hunters frolicking in the foreground. Scooter, the Jack Russell terrier is doing his best impersonation of an art critic.

“All these paintings, whether on paper, wood or canvas relate to one another. The dogs running free, whether in front of a cotton gin or a Blue Ridge sunset speaks volumes to our human experience and interaction with the landscape. And that's the job of the artist, to somehow get it down, to relate what it's like to be on the planet during our time and place.” 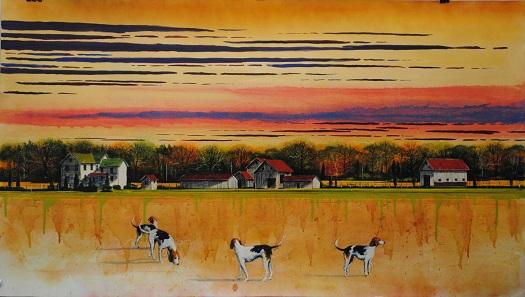 William Dunlap maintains studios in McLean, Virginia; Mathiston, Mississippi; and Coral Gables, Florida. In addition to the Metropolitan and the Corcoran Collection at the National Gallery, Dunlap’s work is included in collections of the Lauren Rogers Museum, Mississippi Museum of Art, Museum of Southwestern Virginia in Roanoke, Ogden Museum of Southern Art in New Orleans, Exxon Mobil Corporation, Riggs Bank, IBM Corporation, Federal Express, The Equitable Collection, Arkansas Art Center, the United States State Department, and United States Embassies throughout the world. He has had solo exhibitions at a great many venues, including the Corcoran Gallery of Art and National Academy of Science.

In 1935, Professor Ellsworth Woodward at Tulane University called out to southern artists to find a symbol for The South. William Dunlap has a candidate for that honor. “I don’t think we could possibly do better,” he writes, “than to elevate the ever-present, ubiquitous, obedient, intelligent, loyal, devoted, dilatory, lazy, noble, faithful, libido driven, sly, sneaky, benign, slobbering, dangerous, mangy, flea-bitten, rabies-carrying, chicken-killing, car-chasing, egg-sucking, Southern Dog.