Nancy Dillon is a living, legendary treasure of the Piedmont Fox Hounds in Virginia. She is the longest subscribing member of the hunt, having started hunting at age eight in 1943. For nearly a half century she has taught and led more children into the hunting field than anyone can count. Her truck and trailer pulling into the meet have been likened to the car at the circus where the clowns just keep coming out.

On Friday, November 8, 2013, the hunt threw a party at Buchanan Hall in Upperville to screen a specially-produced documentary—Lessons in the Piedmont—in tribute to Nancy. Throughout this beautifully-produced and heart-warming film, children (some grown, others still growing), Masters, hunt members, and citizens of the community expressed their love for this woman and their heart-felt appreciation for what she has done to instill a love of the sport, respect for the land, and personal values to generations of children. 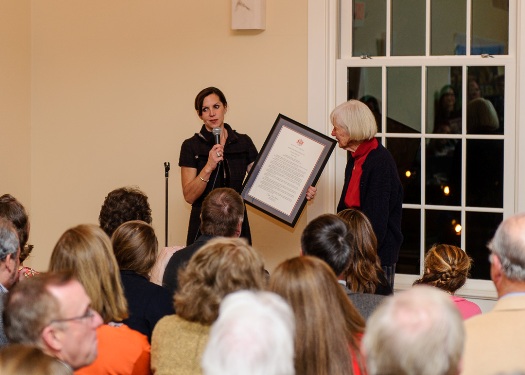 At the conclusion of the evening, Jill Vogel—mother of one of Nancy’s students and a member of the Virginia Senate and House of Delegates—presented Nancy with a proclamation signed by the Governor and passed by both Houses commending Nancy for mentoring thousands of youngsters over the last forty-seven years. 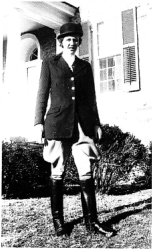 As Nancy explains in the film, it all started when she brought her own children to the hunting field. An impressed parent asked her if she would give her children riding lessons and bring them hunting. Then another, and the rest is Piedmont history.

When the idea for producing the film was in its earliest stages, Gail Wofford, ex-MFH and one of the moving forces in the project, asked for help. Responses were consistently, “Of course, I’d do anything for Nancy!”

We are reminded in the film that there are many youngsters riding today—some of them excellent riders. But when these children dismount, if their grooms weren’t there, they wouldn’t know what to do. In the summers, children spend all day at Nancy’s stable. They are expected to do all the work on the ponies they ride—grooming, tacking up, washing off, and mucking out. They learn horsemanship as well as how to ride.

“Nancy teaches them that you have to get out of bed in the morning and do something,” says Graham Alcock. “She gives kids a sense of purpose.”

Jill Vogel’s young son amazed her early one summer morning. “I cannot be late,” he told his mother. “We have to leave right now!”

Vogel didn’t recognize her own child. “Who are you?” she wondered. “Where did you come from?”

What Nancy imparts to her kids goes beyond riding and horsemanship according to Tad Zimmerman, MFH. Values of politeness and respect and more. On a trail ride, Nancy might turn to a young rider and say, “Tell me the name of that tree.”

Nancy’s husband Billy has been watching from the inside for years, and he tells it like it is. “They gotta go her way,” he says, “not whatever way they want! She instills in the kids a sense of goodness, fairness, and responsibility.”

Wearing a bemused smile on her kindly face (as if to be thinking, What is this fuss all about?), Nancy rose to accept the Commonwealth’s commendation from Senator Jill Vogel and to thank all who had come to show their respect and admiration.

“Gee,” said the gray-haired seventy-eight-year-old lady. “I hope this doesn’t mean that it’s over.”