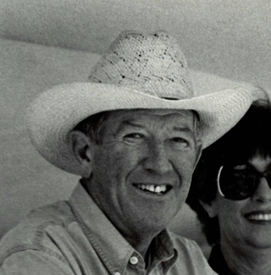 Allen Nixon “Nick” Rodday died on July 26, 2011 at his home in Brewster, Massachusetts on Cape Cod at the age of ninety. He’d retired there after giving up his horse farm, Elm Brook Farm, in Concord, Massachusetts about thirty years ago. He bought himself a lobster boat and for the next fifteen years fulfilled a longtime ambition. But he still couldn’t resist stabling horses, and before long he was once again leading rides and driving his carriage.

Nick Rodday ran a riding stable, Victory Lee and later Elm Brook Farm, through most of the latter half of the twentieth century. He gave lessons, rented hirelings, and took his clients hunting. He was a charismatic guy with a beautiful tenor singing voice to boot. He taught me to ride and took me hunting. I met my wife-to-be Joan and many others who became good friends in his riding ring. He stood up for me at our wedding. Without question, he changed my life profoundly.

+3 # Mark Hammatt 2011-07-31 17:57
Nick was a man like no other. He was always full of life wether it was on horseback or out on the boat pulling traps.He tought me to ride and drive, and every other thing i needed to know to be a help around the barn and caring for the horses. He and his family have been a big part of my life for 30 years and he will be greatly missed.
Reply
+2 # Janet Hitchen 2011-08-09 08:26
Beautiful eulogy Norm, it brought tears to my eyes... Wish I had known him. Janet Hitchen
Reply
+2 # Wendy Euler Huntley 2011-08-18 07:58
Uncle Nick he was bigger than any man I have ever known in my life. There will be none like him again. He taught me so much about horses and life. A little bit of Nick lives on in us all.
Reply
+2 # Little Siobhan 2011-08-18 09:10
Norm, your words take me back 35 years to my childhood at Elm Brook. I remember how special it was to be invited on the Sunday Rides, and what a thrill it was to pilot a certain little Appaloosa pony over the big jumps at Walden Pond!
Reply
+1 # Simon Gardner 2011-08-18 15:01
I can comfortably state that I owe most of my successes in life to Uncle Nick; he was hard on the "boys", we froze our butts off driving countless hay and sleigh rides down the Pine Road; and that "beautiful tenor singing voice" would deftly turn to belting out a shellacking for getting the tractor stuck. At the same time, he expected that we were perfectly turned out, rode harder than anyone, and were the ultimate sportsmen and gentlemen in the field. But the most important lesson we learned from him was the ability to make every person one touches feel important and necessary in life; whether a dirt farmer or a Senator, this amazing man could do that, every damn time. I'll miss my Uncle Nick, but will always carry his tune in my head. Thanks for your superb article, Cheers, Simon Gardner.
Reply
+2 # Jiffy Read 2011-08-18 16:26
A beautiful remembrance, Norm. Nick was one of those rare individuals whose influence radiated out farther than he could ever know.
Reply
+2 # Gretchen Pelham 2011-08-18 17:44
I'm very moved by all the comments this little piece has provoked, and I know that it's because everyone that knew Nick has harbored a love for him through all these years. It's been especially wonderful for me to "touch" again so many old friends!
Reply
+1 # Anne Kaiser 2011-08-20 07:00
Lovely words for a lovely man by a lovely man, Norm. God bless. Anne Kaiser
Reply
# Jeannine Ryser 2013-02-25 10:07
Hello Simon,

Your words and Norm's moving tribute bring me back to a time of joy, hard work, and passion for the beautiful horses that Uncle Nick so generously shared with us all. My 4 years at Elm Brook are filled with too many heart-full memories to recount. But of course I'd have to add the times Uncle Nick would see me sweeping or cleaning stalls and say, "why don't you grab yourself a pony" to go have some fun! One of my big rites of passage was when I could finally ride Moby and jump the roll top! I was deeply sorry to hear about his passing so belatedly (as I live in Canada and was wrapped up in visits with my terminally ill mother at the time). Thanks and well wishes to all who wrote to remember a unique, loving, mentoring spirit! Cheers, Jeannine Ryser
Reply
# Leslie Clark 2014-03-23 11:17
My parents and I used to ride with Nick in the 70's. I would sometimes take class with them. I remember wanting so much to ride my favorite horse, Piccolo. I would follow Nick around, nervously waiting for the best time to ask Nick if could ride him...I am sure he was completely aware of me, but he would make me wait until he finally would turn and say, "Leslie, go get Piccolo". I would so happy to hear those words!
Reply
# Tam Robertson green 2014-09-29 22:57
Thank you for posting this article about Nick. I was one of his students back in 1960 to 1963.. at the Victory Lee Stables. It is true, he was larger than life. I remember how wonderful his whistling was. Going on a hunt in the fall was so memorable. I think that learning how to muck out stalls has served me well, all my life, thanks to my days spent at the stable. Life is a journey and I'm glad I passed his way.
Reply
Refresh comments list
RSS feed for comments to this post