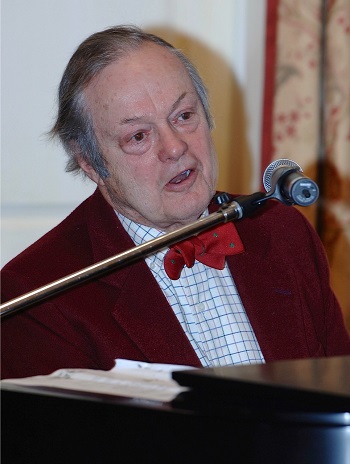 Bill Backer, singing one of his foxhunting ditties while accompanying himself at the keyboard, at the National Sporting Library & Museum. / Douglas Lees photoWilliam M. Backer, a foxhunting man who put phrases and tunes on the lips of people in every corner of the globe, died in Warrenton, Virginia on Friday, May 13, 2016, after a short illness.

A member of the Advertising Hall of Fame, Bill Backer created iconic advertising campaigns such as the 1971 Coca Cola commercial featuring his jingle, "I'd like to Teach the World to Sing." Click for a televised clip of Bill being interviewed for and playing what is arguably the most famous commercial of all time.

Bill added “Miller Time" to the language of those who needed a substitute for “cocktail hour” and created the long-running television argument for Miller Lite: “Tastes Great; Less Filling,” one of the best-liked campaigns in the history of advertising. For Campbell Soup, he persuaded customers that "Soup is good food."

Bill was a longtime member of the Orange County Hunt (VA) and served on the Board of Stewards for fifty years, part of that time as President. At his Smitten Farm in The Plains, Virginia he bred and raised racehorses and was an active member of the Jockey Club and the Virginia Thoroughbred Association.