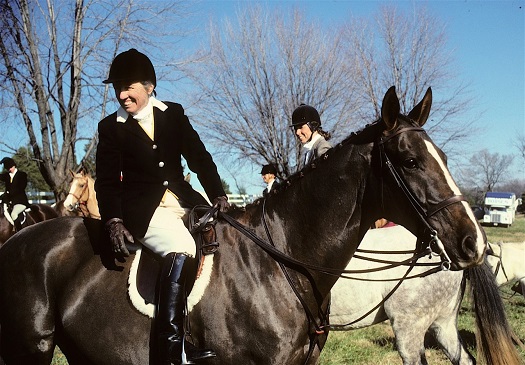 Sally Spilman Tufts passed away peacefully on January 1st, 2016 at age ninety-one. A passionate horsewoman and lifelong foxhunter, she was Joint-MFH of the Warrenton Hunt (VA) for twenty-two years.

How many times have I recalled the first time we met? It was the moment when I, a Northerner, learned the definition of a Southern Lady—a woman who could say the hard thing and make it taste like honey.

About thirty-five years ago, before I had even moved to Virginia, a friend from Massachusetts and I went for a day’s hunting with Warrenton. For whatever reason, my friend’s horse decided to stop at virtually every fence. We were proving to be the cappers from hell. I was embarrassed, but the word, embarrassment, had never been a part of my friend’s lexicon. He just kept trying. At one fence, after several fruitless attempts, a hospitable Warrenton rider offered to get on the horse and jump him over so we could catch up to the field. Even he was unsuccessful, so he and another gracious rider took us through a gate—the nadir of the day’s experiences. Thankfully, the endless day finally ended, and, back at the trailers, Master Sally Tufts came up to us.

# Laura Hunt 2016-01-13 01:28
Such a gracious lady will never be forgotten.
Reply
Refresh comments list
RSS feed for comments to this post