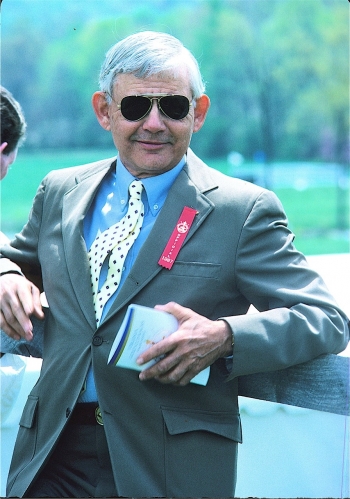 "Dr. Joe" Rogers, MFH / Douglas Lees photoDr. Joseph M. Rogers, who died March 8 at his beloved Hillbrook farm near Hamilton, Virginia, was of a rapidly disappearing breed of Virginians whose financial resources made possible the pursuit of a mission to preserve the countryside before it passed from reality to a lithographic memory.

These Virginians did not keep score with coin. The acquisition of land was not an egotist’s pursuit, and its preservation was not a beauty contest. Land was acquired and cared for because it represented an irreplaceable resource. That it provided the setting for pursuit of agricultural business and field sport was a cherished benefit, not a root rationale. To do otherwise, he believed, was to leave God’s earth to the vagaries of the marketplace.

“Dr. Joe,” as he was known by all, was at heart a man of that earth. He admired a craftsman who could build a proper four-panel fence or shoe a horse as much as he respected a man who made his fortune in business. In many cases, more so. He took pride in being able to train one species of canine to be capable of pursuing another much craftier, quicker, and agile species—a sport called foxhunting, in which the hunted had nearly insurmountable advantage over the hunter. It is a picturesque sport, photographed, illustrated, written about, and otherwise memorialized. But it was also a lot of hard work when you were in charge of bringing the show to the field.