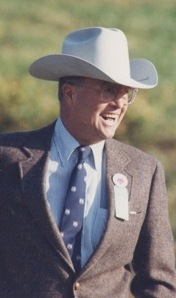 Michael Lathrop Strang, ex-MFH of the Roaring Fork Hounds, died at home on his ranch outside Carbondale, Colorado on January 12, 2014. Born in Bucks County, Pennsylvania on June 17, 1929, his family moved to Colorado in 1932, to a ranch they purchased in the mountains above Golden. Times were tough, so the family made ends meet by bringing eastern kids out west for “summer camp” at the ranch. Mike developed his passion for horses early in life caring for the string of ranch horses that were used to work the cattle and outfit the campers. The family used a team of draft horses to cut and rake the hay they put up and to skid Ponderosa pine logs off the mountain to their sawmill. Mike’s father also raised Thoroughbred racehorses.

Mike and his brother, Bart, were home-schooled by their father until they went to Princeton University. Mike took time off from his studies at Princeton (’56) to serve as a lieutenant in the Army from 1950 to 1953. It was while training future officers at the army’s Officer Candidate School at Fort Benning, Georgia that he met Ben Hardaway and developed his passion for hounds and foxhunting.