Sometimes you’re completely thrown out, but persistence has it’s reward! Jim Duggan hit the jackpot with this shot of the hunted coyote. Note the distinctive markings on the coyote’s front paws. They’ll be looking for him again! Jim tells it this way: 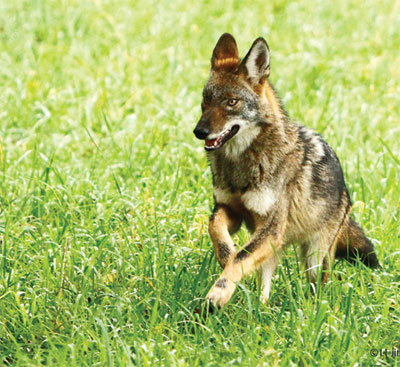 Photo by Jim DugganThe Golden’s Bridge Hounds (NY) were hunting a North Salem fixture on October 4, 2011 with fourteen-and-a-half couple of their Penn-Marydel hounds. Masters Gene Colley and Ed Kelly were leading the field, and the chase lasted for over an hour in perfect hunting weather. I picked a viewing spot from where I could see 180 degrees and still be well hidden under the shadow of a tree and by a stone wall. The hunt went far afield, and then the coyote made a U-turn and started my way. He broke covert and started right at me. He stopped once to look back in the direction of the hounds. By that time my face was covered by the camera so I didn't have to make any movement to give my hiding place away. He kept coming on the line right to me until he heard the camera shutter going off at a rapid pace and just veered right-handed across my stone wall about twenty feet in front of me. Great enjoyment, to pick the right spot for a change! The hounds soon came to the scent and had a merry chase for another half hour or so. By then I guess the coyote had had enough. He put it in high gear and left the area...for now. Picking up hounds was a labor of love, as they had scattered all over the countryside trying to pick up the long gone coyote.