The Look of Eagles 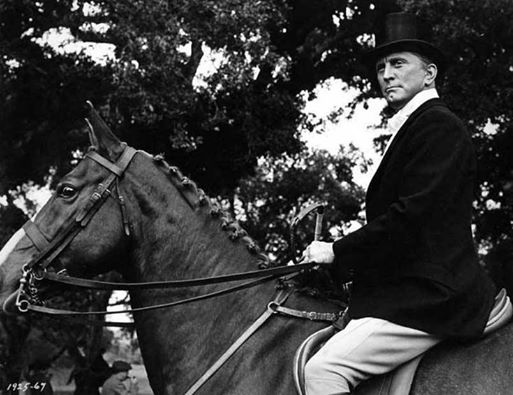 A phrase often ascribed to a proud and majestic horse,“The Look of Eagles” in this photo surely applies to both horse and rider.

This photo of Kirk Douglas in hunting attire is thought to be a publicity still for The List of Adrian Messenger. The film was directed by John Huston, father of Anjelica Huston, whose memoir of growing up at St. Clerans, the family home in Ireland, is reviewed below.

John Huston was a Joint-Master of the Galway Blazers, and he brought many screen stars to St. Clerans, including Kirk Douglas. The foxhunting scenes for The List of Adrian Messenger, in which George C. Scott also appeared, were filmed in Ireland. Scott, along with other Hollywood stars, hunted with the West Hills Hunt in California. John Huston was also a member of West Hills. Whether or not Kirk Douglas hunted with West Hills, we don’t know.

In The List of Adrian Messenger, Kirk Douglas played the part of the villain, Brougham. Wikipedia tells the story this way:

“Having disposed of all possible witnesses to his wartime treachery, Brougham (Kirk Douglas) appears at a Bruttenholm estate fox hunt and introduces himself as a member of the family (he has previously been seen only in disguise). It then becomes clear to the visiting Gethryn and Le Borg that Brougham's next victim is to be the young heir, Derek. In an attempt to divert Brougham, Gethryn makes known his investigation of Messenger’s list, calculating to set himself up as the next victim.

“That night, Brougham sabotages the next morning’s hunt by laying a drag with a fox in a sack over the fields. He especially marks a blind spot behind a high wall, and moves a large hay tedder behind, intending for Gethryn (who has been given the honour of leading the hunt) to be impaled upon its lethal tines. Unbeknownst to Brougham, his plan goes awry when a farmer repositions the tedder early the next morning. The hunt commences but comes to a halt at the specified spot. Gethryn uses a dog to detect the scent of the culprit amongst a group of hunt saboteurs. Brougham, once again disguised, is identified and runs off, mounting Derek's horse. When Derek shouts a command to the horse, the animal stops short, throwing Brougham and impaling him on the very same machine he intended for Gethryn.”

It was pure coincidence that Karin Winegar from Minnesota sent us this riveting photograph of Kirk Douglas just as we were publishing Martha Woodham’s review of Anjelica Huston’s memoir, A Story Lately Told: Coming of Age in Ireland, London, and New York. Scott Tepper, MFH researched the photo. The late and renowned Hollywood director John Huston provided the link!

Caveat: don't watch it if you plan sometime to watch the entire movie.
Reply
Refresh comments list
RSS feed for comments to this post