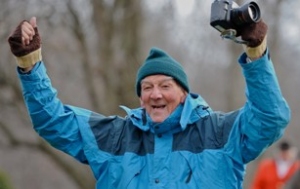 Sporting photographer Jim Meads achieved a personal milestone and undoubtedly established a world record on December 5, 2010 when he photographed the Loudoun West Hunt near Leesburg, Virginia. This was the five hundredth unique hunt that Meads has photographed over the course of a career spanning sixty years.

Meads, who lives in Wales, follows hunts on foot and in vehicles and always seems to appear where the action is, even before the mounted followers arrive. His long legs and astounding endurance has allowed him to capture many of the greatest action shots of foxhunting ever recorded on film. He has photographed hunts in England, Ireland, Canada, and the U.S.

# Annette Harris 2013-02-18 06:19
I have just spoken to Jim Meads on the telephone, what an amazing charactor this guy is! I could listen to his stories forever. I'm a horse lover and it was such a pleasure to speak to this gent purely by chance and he intreagued me with his stories. Good luck with your record. What an amazing man.
Reply
Refresh comments list
RSS feed for comments to this post